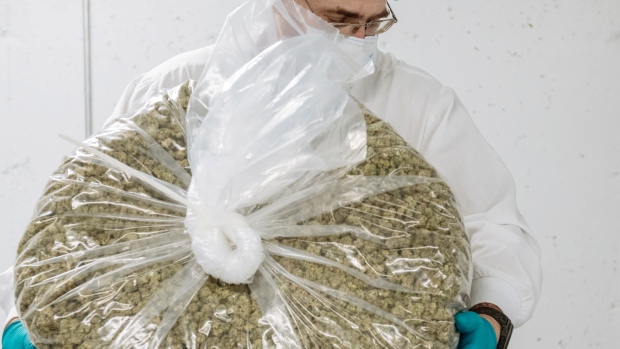 A worker holds a bag of marijuana buds at a cannabis production facility in Fenwick, Ontario, Canada. , Photographer: Galit Rodan/Bloomberg

SOL Global Investments Corp., the cannabis firm that short sellers singled out for allegations of insider self-dealing, is pursuing future investments and wouldn’t rule out doing one with Aphria Inc.

Hindenburg Research and Quintessential Capital Management launched a short-selling campaign against Aphria last month, alleging in a report that the Leamington, Ontario-based firm bought assets at inflated prices from SOL, which is closely connected to Aphria via SOL’s chairman and chief investment officer, Andy DeFrancesco.

Delavaco Group, which was founded by DeFrancesco, was named as a special adviser to Aphria on several deals, including the reverse takeover that took Aphria public in 2014. Aphria CEO Vic Neufeld was also chairman of SOL until last April.

In response, SOL’s board formed a special committee to review the allegations. That process is ongoing, but in the meantime SOL is moving ahead with other transactions and would consider doing more deals with Aphria, said Chief Executive Officer Brady Cobb.

“If a transaction that’s accretive to my shareholders lands on my desk I’ll look at it and if we have interest we’ll deploy the diligence teams, the legal teams, the financial teams to go do their jobs,” Cobb said in an interview Tuesday following a thinly attended annual meeting at SOL’s lawyers’ office of Gowling WLG in Toronto.

Unlike Aphria, which appointed an independent chairman after the allegations and whose CEO Neufeld plans to step down in the coming months, SOL has no plans to make changes to its management or board, Cobb said.

“Business hasn’t slowed down, if anything it actually sped up, there were more deals that were brought to us” after the short report, he said. “We’re working on a number of transactions now that will be very accretive to shareholders.”

The sale of LATAM Holdings Inc. to Aphria, the deal at the center of the short allegations, was reviewed by lawyers, investment bankers and stock exchanges and received an independent fairness opinion, Cobb said. Still, SOL will “approach transactions with an eye towards being very prudent and being overly cautious on diligence, being overly cautious on avoiding any issues” in the future, Cobb said.

The short sellers alleged that SOL, which used to be known as Scythian Biosciences Corp., bought “largely worthless” assets in Latin America, held them for a brief period of time, and then sold them to Aphria at a significant markup. Quintessential, one of the short sellers, tweeted Friday that the planned management changes at Aphria “vindicate” its thesis and said it would move onto new projects.

SOL is shifting its focus to the cannabidiol, or CBD, market in the U.S. and Europe and will announce new transactions in the coming weeks and months, Cobb said.

SOL’s stock has more than doubled in the past month to $2.95 a share, giving it a market value of about $145 million and erasing losses after the short sellers report.