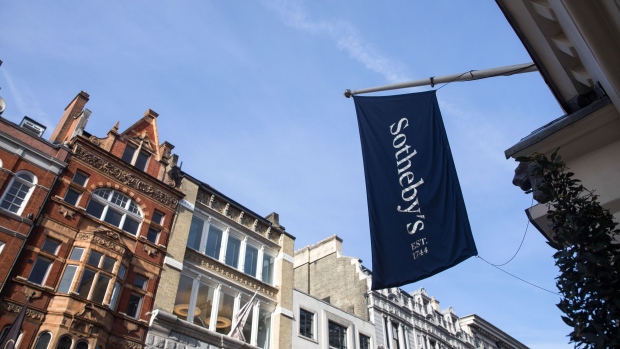 A flag flies outside Sotheby's auction house on New Bond Street ahead of a preview of 'The Midas Touch' auction in London, U.K., on Friday, Oct. 12, 2018. , Simon Dawson/Bloomberg

Telecom titan Patrick Drahi is buying Sotheby’s for US$2.7 billion, taking it private after 31 years as a public company, and placing the world’s two leading auction houses under the control of French billionaires.

Investors will receive US$57 in cash per share of Sotheby’s common stock under terms of the agreement, according to a statement Monday from the New York-based company. The offer represents a 61 per cent premium to the closing price on Friday. Sotheby’s shares rose 57 per cent to US$55.58 as of 9:40 a.m. in New York. The enterprise value is US$3.7 billion.

Sotheby’s shares had dropped 40 per cent in the past year as the company battled expenses and margins even as masterpieces and contemporary works set auction records. Drahi, 55, is the president of Altice Europe NV, a publicly traded telecommunications business with more than 30 million customers. An avid art collector, he’s worth US$8.6 billion, according to the Bloomberg Billionaires Index.

“Sotheby’s is one of the most elegant and aspirational brands in the world,” Drahi said in the statement. “As a longtime client and lifetime admirer of the company, I am acquiring Sotheby’s together with my family.”

Drahi’s latest purchase is a surprise move for a man known for the telecoms empire he built, which grew out of a string of debt-financed acquisitions in France before eventually expanding to the U.S. in 2015. Drahi said he intends to monetize a small piece of the U.S. business for as much as $400 million to fund the Sotheby’s deal.

Altice Europe’s main asset is SFR in France. The business is finally returning to growth after years of customer losses amid cutthroat competition for subscribers in France. Shares in Altice Europe have gained more than 70 per cent this year.

Drahi’s takeover would mean that French citizens will own the world’s two major auction houses. The family of Francois Pinault, founder of Paris-based luxury goods giant Kering SA, owns Christie’s after first buying a 29.1 per cent stake in the company from British billionaire Joe Lewis two decades ago.

“It was ripe for Sotheby’s to go private,” said Philip Hoffman, chief executive officer of the Fine Art Group and a former Christie’s executive. “Christie’s has more advantages being run privately and not having public quarterly reporting that puts pressure on their ability to do deals.”

--With assistance from Ben Stupples.