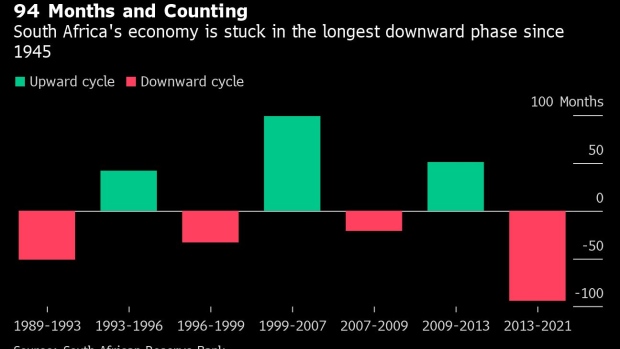 South Africa recorded its first quarterly primary budget surplus since 2018 in the three months through June, a sign that the National Treasury’s efforts to bring spending in line with revenue are succeeding.

The government’s primary balance swung to a surplus of 9.8 billion rand ($652 million), or 0.6% of gross domestic product, in the first quarter of the 2022 fiscal year, compared with a deficit of 2.2% of GDP in the previous three months, according to the South African Reserve Bank’s Quarterly Bulletin published on Tuesday. A primary surplus, which excludes interest costs, suggests the state can extract resources from the economy necessary to service debt.

The Treasury this year shifted focus to make a primary budget surplus its most critical fiscal anchor, instead of a spending ceiling.

In February, the Treasury projected a primary surplus of 0.1% of GDP in 2024-25, targeted a positive balance of 0.3% of GDP in the long run and saw debt stabilizing at 88.9% of GDP in 2026 fiscal year. The medium-term budget scheduled for Nov. 4 is likely to show an improvement in these metrics, after changes to the way GDP is calculated showed the economy is bigger than previously estimated and with tax revenue overshooting estimates because of a windfall in mining profits.

The government is “on track” to achieve a primary surplus by the middle of the decade, Edgar Sishi, acting head of the Treasury’s budget office, said last week at a tax conference.

While the latest data reflects an improvement in economic activity from the height of restrictions to curb the coronavirus pandemic, South Africa remains stuck in its longest downward cycle since World War II.

The economy entered the 94th month of a weakening cycle in September, according to official data. However, it’s possible South Africa has already entered an upward cycle given the strong recovery in output from 2020, when the economy contracted the most in at least 27 years, the central bank said in an emailed response to questions.

The central bank monitors more than 300 indicators representing economic processes such as production, sales, employment and prices to determine the direction of the trend and is partially waiting for revised data to identify a turning point, it said. The last major declining cycle in the economy lasted 51 months between 1989 and 1993, when the former all-White government renewed a state of emergency and the country prepared for its first democratic elections.

These are some of the other key points from the Quarterly Bulletin: