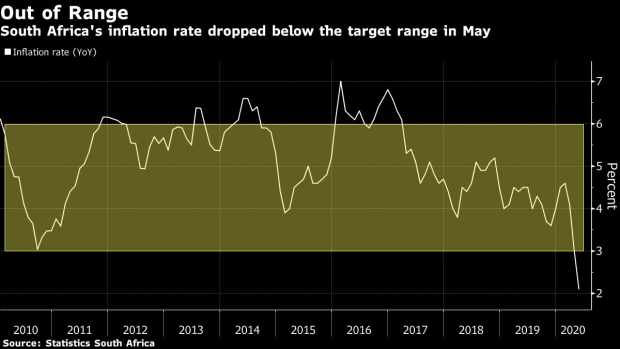 People gather on a street corner in the Central Business District (CBD) of Johannesburg, on Thursday, May 7, 2020. Almost one million people in Johannesburg, South Africa's commercial hub, are in need of food aid due to movement restrictions imposed to curb the coronavirus pandemic, according to its mayor. Photographer: Waldo Swiegers/Bloomberg , Bloomberg

Consumer prices rose 2.1% from a year earlier compared with 3% in April, the Pretoria-based Statistics South Africa said Wednesday in a statement on its website. That’s the lowest since September 2004. The median estimate of 15 economists in a Bloomberg survey was 2.2%. Prices fell 0.6% in the month, the biggest drop since November 2003.