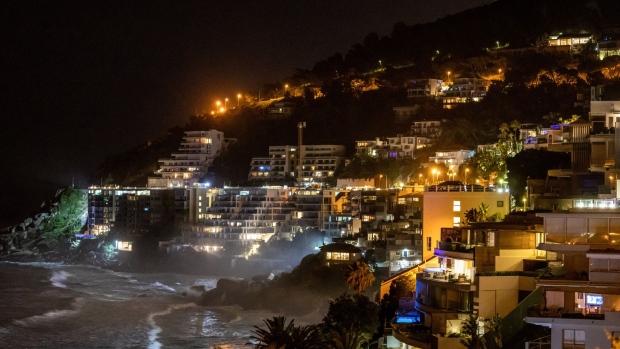 Lights illuminate residential seafront properties in the Clifton district of Cape Town, South Africa, on Tuesday, Aug. 2, 2022. South Africa's state-owned power utility Eskom Holdings SOC Ltd. warned it may have to implement rolling blackouts for the first time in more than a week due to a shortage of generation capacity. , Bloomberg

Fuel was delivered to PetroSA’s facility in Mossel Bay on the south coast after the vessel berthed Thursday morning, Eskom Holdings SOC Ltd. said in statement on Twitter. The diesel will be transported to the nearby Gourikwa open-cycle gas turbine station and to Ankerlig, just north of Cape Town, throughout the weekend.

The utility said late on Wednesday that it would have to cut 4,000 megawatts from the grid until its stocks of the fuel are replenished. It ran low because the fuel vessel couldn’t berth due to rough seas. Eskom now plans to reduce so-called loadshedding to stage 3, where it removes 3,000 megawatts, from 5 a.m. on Oct. 1.

Cash-strapped Eskom is running the diesel turbines to supplement generation capacity decimated by breakdowns at its aged coal-fired plants that provide the majority of the country’s electricity. It may need to spend as much as 2.4 billion rand ($133 million) a month on the fuel, according to presentation to lawmakers earlier this week.

Thursday was the 115th day of rolling blackouts in 2022. Eskom cuts demand from the national grid to prevent it from collapsing.