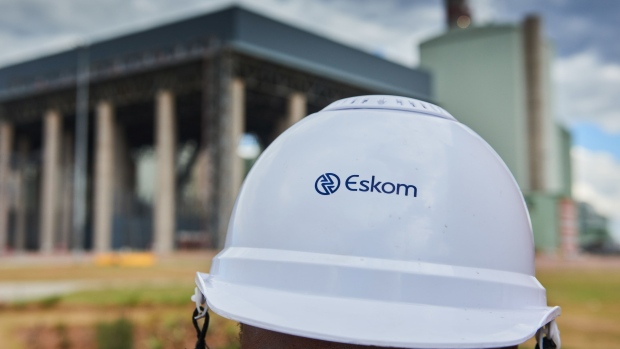 A visitor wears a branded hard hat during a media tour of the Eskom Holdings SOC Ltd. Medupi coal-fired power station in Lephalale, South Africa, on Thursday, May 19, 2022. South Africa’s Eskom is increasing power cuts to prevent a total collapse of the grid as issues grow from lack of imports to breakdowns at its coal-fired plants. Photographer: Waldo Swiegers/Bloomberg , Bloomberg

(Bloomberg) -- Tensions are rising at Eskom Holdings SOC Ltd., with the struggling South African electricity supplier confirming protests at a number of power plants following a breakdown in wage negotiations.

Groups at six coal-fired stations “have blocked roads leading to some of the power stations, which hampers the movement of people and goods into or outside of the facilities,” spokesman Sikonathi Mantshantsha said in a text message on Thursday. “While some incidents of intimidation have been reported, the protesters are largely peaceful at this stage.”

The development adds pressure on the state-owned utility, already failing to meet electricity demand and forced to implement controlled blackouts to keep the grid from a total collapse. Eskom, which generates almost all of the nation’s power, reached a deadlock with labor unions in pay talks earlier this week.

The company’s last major wage negotiations in 2018 broke down into labor protests -- considered illegal because the utility provides an essential service -- that resulted in electricity shortages. A three-year deal was then signed for pay increases of as much as 7.5% annually.

Some of Thursday’s demonstrators wore union gear, Mantshantsha said. The police have been alerted.

The National Union of Mineworkers and National Union of Metalworkers of South Africa are the two biggest labor groups at Eskom. The energy coordinator for NUM didn’t immediately return a call and text message. A spokeswoman for NUMSA declined to comment.