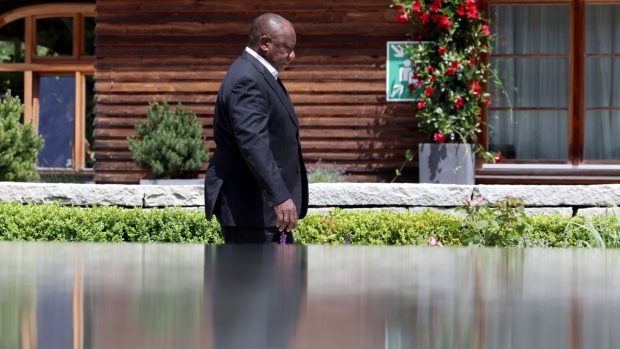 Cyril Ramaphosa, South Africa's president, arrives on day two of the Group of Seven (G-7) leaders summit at the Schloss Elmau luxury hotel in Elmau, Germany, on Monday, June 27, 2022. G-7 nations are set to announce an effort to pursue a price cap on Russian oil, US officials said, though there is not yet a hard agreement on curbing what is a key source of revenue for Vladimir Putin for his war in Ukraine. Photographer: Liesa Johannssen-Koppitz/Bloomberg , Bloomberg

(Bloomberg) -- South African police are investigating one of President Cyril Ramaphosa’s advisers for allegedly smuggling foreign currency on behalf of the president, the Sunday Independent reports.

The unidentified aide is said to be under investigation by the police’s priority crimes unit for smuggling money from Qatar and Saudi Arabia on a private jet while traveling on a diplomatic passport, according to the newspaper.

This version of events is at odds with Ramaphosa’s statement that the source of the foreign currency, which was stolen from his farm in 2020, was from the sale of livestock. Ramaphosa is one of South Africa’s biggest farmers of Ankole cattle, a rare Ugandan breed.

The presidency and the priority crimes unit were not immediately available for comment when contacted Sunday by Bloomberg News.

Citing unidentified sources, the Sunday Independent alleges that the money from the two Arab countries was placed into pieces of furniture before being transported to Ramaphosa’s farm.

Cattle Sale That Dragged Ramaphosa Into Political Storm Is Back

Arthur Fraser, former director general of South Africa’s National Intelligence Agency, accused Ramaphosa of money laundering and corruption on June 1, and said that he covered up the scale of the theft at the farm.

In his affidavit, Fraser alleged that around $4 million that stored in furniture on the farm had been taken. Ramaphosa has confirmed that money was taken from the farm, but far less than Fraser alleged, and he’s denied any wrong doing.

Ramaphosa has been instructed by his party, the African National Congress, to appear before its ethics committee to address the matter. He’s also being probed by the nation’s graft ombudsman. The scandal comes just five months before Ramaphosa is expected to seek re-election as president of the ANC.