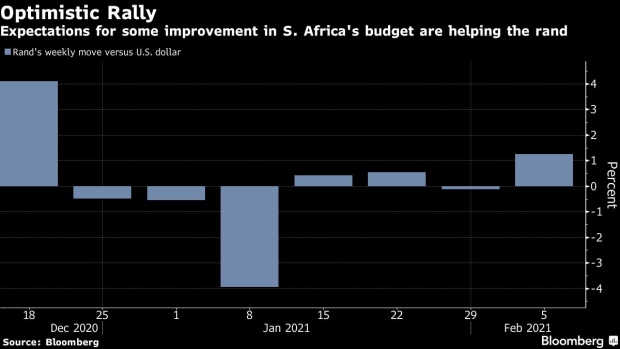 The rand is headed for its biggest weekly gain since mid-December as investors warmed to signs that South Africa’s fiscal deficit may be lower than expected as tax revenue overshoots.

The rand traded 0.2% firmer at 14.9833 per dollar by 8:34 a.m. in Johannesburg, bringing its gain this week to 1.2%, the best performance among emerging-market currencies after Turkey’s lira. Bond yields extended a drop to the lowest in almost three years.

South African tax collections are expected to overshoot budget estimates, which could take some pressure off the National Treasury as it tries to reign in a fiscal deficit that’s ballooned due to the coronavirus pandemic. Debt issuance is also higher than budgeted, with the government taking advantage of strong demand to boost weekly sales.

“There are some expectations that South Africa’s budget this month will see positive developments on fiscal consolidation,” said Annabel Bishop, Johannesburg-based chief economist at Investec Bank, in a note to clients. “There is also marked room for disappointment as the borrowing trajectory is extremely high, and unlikely to be cut.”

Tax revenue for the first nine months of the fiscal year was 10.6% lower than in the same period in the previous year, but better than the 17.9% shortfall predicted for the full year in October’s medium-term budget policy statement.

Rashaad Tayob, a money manager at Abax Investments Ltd. in Cape Town said with revenue better than expected, it could be feasible to reduce issuance at the weekly nominal and inflation-linked bond auctions by as much as 2 billion rand ($134 million), from 8.6 billion rand currently. The Treasury said this week it won’t cut the amount in the current fiscal year.

Maintaining the current issuance of bonds would mean banks and pension funds would find it difficult to absorb it all, keeping the yield curve steep, Tayob said. Still, the Treasury may want to keep funding levels high.

“I understand if Treasury doesn’t see the point of cutting it down,” Tayob said. “They would rather overfund given the difficult economic environment and the potential for continued high budget deficits in the coming years.”