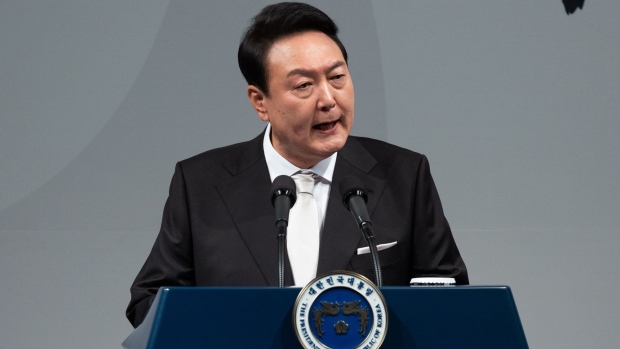 (Bloomberg) -- South Korean President Yoon Suk Yeol indicated his new government will take part in a regional economic group Joe Biden is expected to soon unveil, in a show of support for the US president days before he arrives in Seoul for talks.

Yoon, who took office on May 10, told parliament Monday he wanted to discuss with Biden when they meet later this week how his government can contribute to the Indo-Pacific Economic Framework. The pact is supposed to help in coordination of regional supply chains, infrastructure and other areas.

Yoon said his talks with Biden will “include not only supply chain stabilization measures, but also various economic security issues, such as the digital economy and carbon neutrality.” South Korea is a major producer of semiconductors and Yoon has backed Biden’s supply chain initiatives.

The IPEF is part of the Biden administration’s efforts to counter China’s clout in Asia, following the US withdrawal from talks on the Trans-Pacific Partnership regional trade agreement under former president Donald Trump. Biden is set to make the announcement about IPEF during his first visit to allies South Korea and Japan since taking office. The trip will run from May 20-24, the Sankei newspaper of Japan reported last week.

Details of the IPEF are hazy and the Biden administration has stressed it won’t include lower tariffs or better access to US markets. Some in Congress have criticized the IPEF as lacking substance, with senators from both parties blasting Biden’s trade agenda at a March hearing and grilling US Trade Representative Katherine Tai over a shortage of ambition to negotiate new agreements.