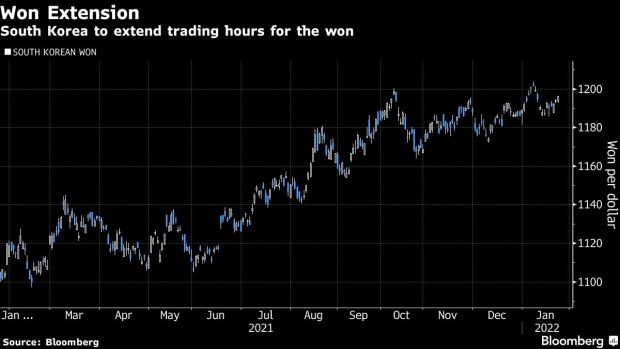 “The government in February will push for talks with MSCI Inc. to join its developed-market equities index, after preparing a final plan based on domestic and external feedback,” the statement said.

Authorities have initiated a slew of measures to court foreign investors and boost the case for the nation’s stocks to be included in MSCI’s developed-market equities index. A local foreign-exchange committee has been looking into ways to address the challenges faced by global funds that trade the won outside local hours.

South Korea has been wary of opening up its foreign-exchange market after two financial crises since 1997 triggered capital outflows. Given the restricted hours, overseas investors currently rely on non-deliverable forwards to manage their exposure to the won offshore.

Why Korea Has First-World Economy and Developing-Market Currency

Discussions over the extension of trading hours for the currency market have been ongoing for a while. The efforts intensified in December when the government said it would overhaul the law on FX transactions this year, and introduce an electronic platform to grant foreign investors and local firms access to real-time data and trading.

The first draft of details on the FX systems reform will be prepared within the first half of the year, while the electronic platform will go into effect sometime in the latter half, according to the statement.

Extended trading hours for the won will also address one of MSCI’s key concerns about including South Korean equities in the MSCI World Index. The index provider will release the results of its review next month, and South Korea is seeking an upgrade from emerging- to developed-market status.