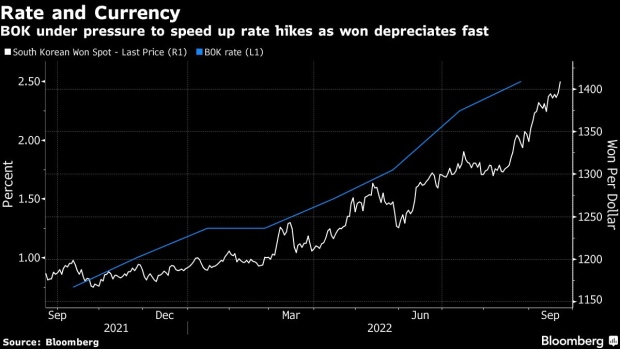 (Bloomberg) -- Bank of Korea Governor Rhee Chang-yong widened the door for an outsized interest-rate hike after another jumbo move by the Federal Reserve pushed the won below a key psychological level.

The Fed raised rates by 75 basis points overnight and forecast its benchmark would reach 4.6% in 2023. Rhee told reporters hours later that market expectations for the Fed rate to stabilize at around 4% has “changed a lot” and that the BOK will consider action accordingly.

“I will assess with the board members how the changes in these preconditions affect domestic inflation, growth trends and foreign exchange markets to determine the extent, timing and trajectory of rate hikes,” he told reporters just after the currency weakened past 1,400 to the dollar. “But no decision has been made.”

Powell Signals Recession May Be the Price for Crushing Inflation

The won breached that symbolic level at the start of trading on Thursday as Rhee was meeting with Finance Minister Choo Kyung-ho and other economic policymakers. In a statement before the meeting, Choo said that South Korea “would pro-actively manage short-term volatility, while also seeking the right policy mix considering trends beyond next year.” Afterwards, he said that Korea’s foreign exchange reserves could change as authorities take steps to stabilize markets, indicating that the government could use the reserves to intervene in the currency market.

Rhee’s comments increase the chance of more aggressive policy tightening for the rest of the year. The BOK has already lifted rates five times this year, including a half-point hike in July that was its biggest increase in history. The next rate decision is on Oct. 12.

The depreciation of the won increases the price of imports and leads to higher inflationary pressure. Rhee said the BOK remains focused on fighting inflation and that he plans to present new forward guidance after assessing price pressures, although he didn’t say when this would be announced.

“Markets are weighing the chance of a big-step hike not only next month but also in November,” said Roh Hyun-woo, a strategist at Hanwha Asset Management. “The acceleration of tightening would serve as a factor lessening the depreciating pressure on the won, but will likely come short of stemming the trend of growing dollar strength.”

Yoon Yeo-sam, an analyst at Meritz Securities in Seoul, said the BOK may raise the rate to as much as 3.5% by the end of the year -- meaning a 50 basis point hike in each of the remaining two meetings in 2022 -- to catch up with the Fed.

Higher rates may worsen the pain for many Korean businesses and consumers. Exporters, which are an important part of the economy, are seeing global trade momentum slowing while elevated energy prices undercut their bottom line. Households are also burdened by fast inflation, rising interest expenses and a downturn in the property market which accounts for the largest share of personal assets.

The BOK sees inflation staying in the 5-6% range for some time to come. While consumer price increases slowed slightly to 5.7% in August, the rises in the past three months are faster than anything since 1998. The Finance Ministry attributed the pullback last month to an easing of oil prices and cuts to fuel taxes.

The BOK was among the first central banks to raise rates in the developed world and is now entering a second year of policy tightening. Its rate stands at 2.5% and may go up to as high as 3.75% within the next six months, according to Bloomberg calculations.