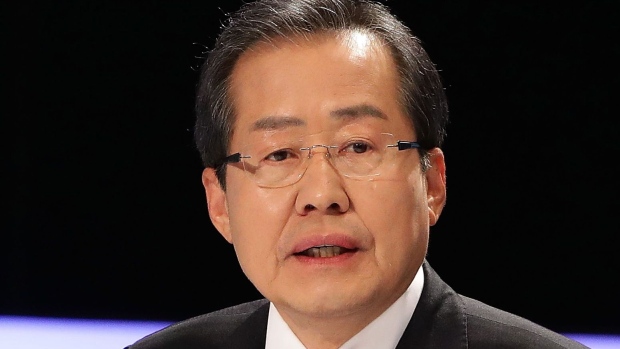 “It’s already a dead agreement,” Hong Joon-pyo, the People Power Party contender told reporters Tuesday. He was referring to a 2018 deal struck between Moon and Kim at a summit in Pyongyang on a range of measures that included withdrawing guard posts from their heavily militarized border.

“I will scrap the Sept. 19 inter-Korean military agreement immediately after I take office,” Hong said, adding he would restore joint U.S.-military drills that have been cut or scaled back in recent years and resume reconnaissance flights from South Korea that were halted under the agreement.

Hong, who launched a failed campaign for presidency in the last election in 2017, is offering a sharp-right turn in foreign policy that includes his long-sought goal of returning nuclear weapons to South Korea and for Seoul to look into building its own nuclear program.

He wants a clean break from the progressive government of Moon, who has sought reconciliation with Pyongyang and advocated peaceful relations.

The conservative PPP holds a party primary on Nov. 5 ahead of the March presidential election. Hong’s main challenger in the party race is Yoon Seok-youl, a former top prosecutor whose battles with Moon made him one of the country’s most popular figures.

Moon on Tuesday met Lee Jae-myung, the former rival his Democratic Party chose to replace him, in an attempt to build a united front before the election in which their bloc’s control of government hangs in the balance.

Moon has been pushing for another summit with Kim, an event that could help his party in a what is expected to be a tight presidential race. Such a meeting could also benefit the North Korean leader, helping him win concessions that might not be available should a conservative leader take charge next year.

There has been almost no progress on other parts of the 2018 military agreement, such as connecting railways, reuniting separated families and preparing to restart joint economic projects shut amid political rancor that have remained closed due to global sanctions on Pyongyang.

Since the agreement was reached, North Korea has tested new missiles designed to deliver nuclear warheads to all of South Korea, labeled Moon a meddlesome mediator and reduced to rubble a $15 million liaison office that was one of the South Korean president’s biggest diplomatic achievements.

It has recently warmed up Moon in what could be an attempt to help Seoul ease sanctions choking the state’s paltry economy. South Korean presidents serve a single, five-year term.