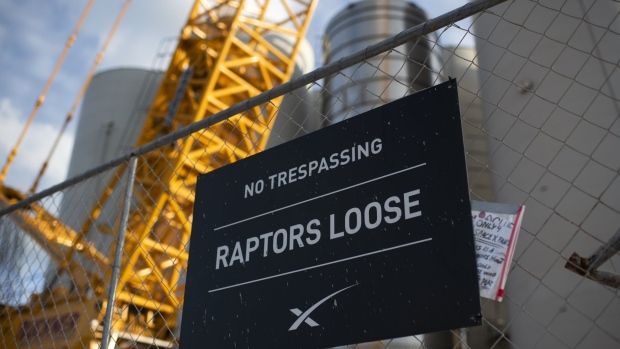 A sign outside SpaceX launch facility while under construction in Boca Chica, Texas in October 2021. , Bloomberg

SpaceX no longer proposes to build a desalination plant, power plant, natural gas pre-treatment system and liquefier at the site’s vertical launch area, the US Fish & Wildlife Service said in a May 12 document obtained by Bloomberg through an open records request.  The SpaceX plans were described in previous assessment documents in September and October. SpaceX didn’t immediately respond to an emailed request for comment.

Musk, a fan of vertical integration, at one point planned to drill wells at the launch site to produce his own natural gas to be treated, superchilled into liquid and used as rocket fuel. Despite the change in plans, SpaceX isn’t done using natural gas. The company will still use liquid methane for rocket fuel and appears to have built a natural gas power plant at site’s manufacturing and production area, images from RGV Aerial Photography show. The site, known as Starbase, also continues to receive LNG tanker truck deliveries from Stabilis Solutions.

A coalition of environmentalists and community groups oppose SpaceX’s expansion at the Texas beach where the Rio Grande empties into the Gulf of Mexico. A review of the company plans by the Federal Aviation Administration has been delayed twice, though the US Fish & Wildlife Service recommended several mitigation measures in its biological assessment. Those included hiring a qualified biologist to monitor vegetation and birds, operating an employee shuttle between the launch facility and the nearby town of Brownsville and adjusting lights to minimize the impact on sea turtles. The latest report said SpaceX provided an update of its biological monitoring plan to the regulators.