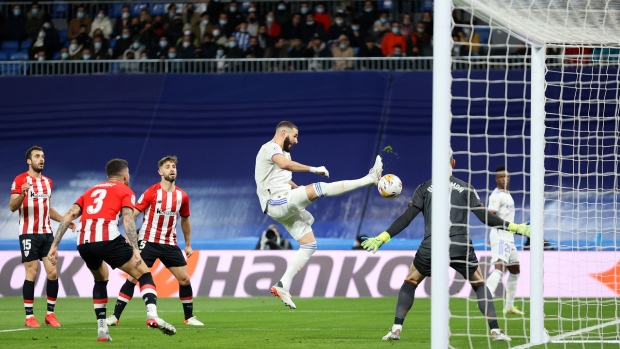 (Bloomberg) -- Several Spanish soccer clubs are considering joining the plan proposed by three of the country’s biggest teams to replace the agreement LaLiga reached with CVC Capital Partners to inject roughly 2 billion euros ($2.3 billion) into the sport, according to the banker who has structured the alternative deal.

“From what I understand, a lot of clubs are having doubts and some of them already took the decision that they’re not going to join the CVC proposal,” Anas Laghrari, a partner at Key Capital, said in an interview.

Real Madrid CF, FC Barcelona and Athletic Bilbao sent a letter Thursday to all first and second division clubs, outlining a plan to set up a special purpose vehicle to raise 2 billion euros in debt and distribute the money to the clubs in the same proportion discussed in the CVC deal. Clubs would then repay 115 million euros each year for 25 years through media revenue.

“What we’re doing here and what we’ve been working around is to substitute the source of the funds, not the use of the funds. We have no problem with the clubs using the money in the same way as in the CVC deal.” The proposal “makes sense, and it’s cheaper” than the CVC one, said Laghrari. “I wonder what is the motivation behind pushing the clubs to the cliff with a very expensive transaction that might actually hurt their ability to compete in the future,” he said.

The conflicting plans highlight the ongoing battle between Madrid and Barcelona, the country’s most successful teams and heavyweights in the European game, and LaLiga which runs Spain’s top-two leagues. A long-simmering rift over how to safeguard and boost the sport’s riches burst into the open in April when Madrid and Barcelona were at the forefront of creating a European Super League, now on hold after an international outcry.

The deal would be structured as a private placement to raise about 2 billion euros of debt, with a 25-year maturity, no collateral but a priority payment. LaLiga will pay first to those creditors and then redistribute the rest to the clubs. The deal is aimed mostly at U.S.-based investors, such as insurers and pension funds. he said.

“Basically, there’s just an instruction for the league to make a priority payment to a vehicle created to finance the clubs ahead of distributing the remaining TV rights,” said Laghrari, adding that it’s the same structure used to fund the revamp of Real Madrid’s Bernabeu stadium and the European Super League project.

Key and its associates are willing to talk to anybody.

“We are available for anybody who wants more information at club level and league level.” Laghrari said, leaving room for more banks to get involved in the deal, currently including JP Morgan, Bank of America and HSBC. Other banks, including lenders from Spain, may join in the future, he said.

Spain’s soccer league hit back at the attempt to to derail the deal it reached with CVC.

“It’s another attempt to break the consensus with the only aim of continuing to preserve the selfish interests of a few against the common benefit for the majority,” Javier Tebas, chairman of LaLiga, wrote in a letter to Spanish clubs seen by Bloomberg.

LaLiga also says that because the funding is through debt, that would make it impossible for many clubs to meet their financial obligations. A spokesman for LaLiga confirmed the letter was sent.

Under the CVC proposal, the private equity firm would own a 10% stake in a newly created entity that would hold LaLiga businesses and the clubs’ media rights for 50 years.