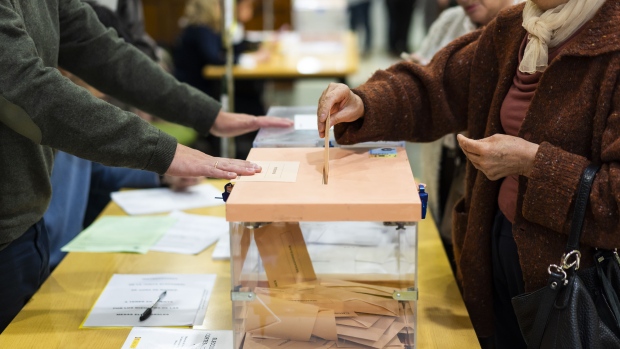 Pedro Sanchez, Spain's prime minister, speaks to his supporters during a campaign rally in Madrid, Spain, on Friday, April 26, 2019. The dream scenario for 47-year-old Sanchez would be if he could reach 176 seats needed for a parliamentary majority with his left-wing ally Podemos -- but without the Catalan separatists who helped put him into power last year. Photographer: Angel Navarrete/Bloomberg , Bloomberg

(Bloomberg) -- Socialist Pedro Sanchez is set to hang on as prime minister by cobbling together a left-leaning government coalition and he may not even need any votes from Catalan separatists, early returns in the Spanish general election suggested.

With 43 percent of the vote counted, the Socialists are on track to win 129 seats, up from 85 in 2016. Its left-wing ally Podemos has another 40 seats while the Basque Nationalists, another group close to Sanchez, has six. That would give Sanchez 175 seats, just shy of the 176 he needs for a majority. The Socialists might be able to find that final vote from a party from the Canary Islands, while the moderate Catalan separatist group Esquerra Republicana has another 15 seats and has signaled its willing to help.

All this would give the 47-year-old premier a shot at forming Spain’s first stable government in almost four years and enable him to chart a way forward for the country after years of economic crisis and political turmoil. It will mean a government in Madrid that seeks conciliation rather than confrontation with the separatists controlling Catalonia and will make him the standard bearer for social democracy in Europe.

A second Sanchez government would buck the trend of crumbling voter support for Europe’s other center-left parties. He’s already served 10 months as the head of a minority government but was forced to call a snap election when he failed to pass his budget.

The premier has wooed Spaniards by boosting the minimum wage and pension payments while remaining committed to spending within the fiscal limits set by the European Union.

Sanchez also capitalized on the emergence of a new nationalist party to motivate supporters, who have historically been less reliable than voters on the right. Vox is set to win seats in parliament for the first time, but its 23 seats suggest it’s set to fall short of expectations and the huge buzz around their sudden emergence on the political scene. The traditional conservative group, the People’s Party, lost about half its seats and will have 67 deputies in the new parliament.

Vox’s parliamentary presence will mean Spain is no longer exempt from the right-wing populism that’s swept across Europe and the U.S. But Spain remains a particularly enthusiastic member of the European Union. Not even Vox is suggesting pulling out.

The campaign was dominated by the question of how to handle the aftermath of Catalonia’s 2017 push for independence. Sanchez said the best way to calm tensions after the illegal referendum is to talk about granting Catalonia more autonomy, though he’s ruled out an official vote on secession.

A government is unlikely to be formed for at least a month. Lawmakers say they are only likely to launch serious negotiations to cobble together a governing coalition after another round of elections on May 26, when Spaniards are set to choose representatives for municipal, regional and EU posts.

--With assistance from Charlie Devereux, Katerina Petroff and Thomas Gualtieri.

To contact the reporter on this story: Jeannette Neumann in Madrid at jneumann25@bloomberg.net

To contact the editors responsible for this story: Ben Sills at bsills@bloomberg.net, Charles Penty