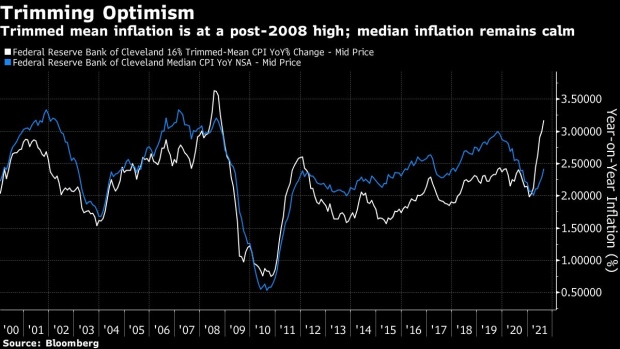 (Bloomberg) -- Stagflation emerged this week as a new bogeyman bearing down on the global recovery. Yet the bond market, an astute judge of the economy, doesn’t look scared.

Based on key indicators like Treasury securities that predict the rate of inflation over 10 years hovering near the Fed target, to the shape of the yield curve, the world’s biggest bond market says it’s an empty threat.

“I just don’t see the stag in the stagflation now,” said Subadra Rajappa, head of U.S. rates strategy at Societe Generale SA. “The inflation aspect may be troubling. But that means you should see higher real yield and higher nominal yields. That’s just not what the market is pricing in, as it has very low real yields.”

Fears were fanned by the sputtering of China’s growth engine and soaring energy prices. Global fund managers surveyed by Bank of America Corp. just listed stagflation risk among their top concerns and the News Trend for the word has spiked to its highest in at least a decade.

The rate on 10-year breakevens, which is derived from inflation-protected as well as nominal Treasuries and represents the average annual expected inflation rate over the next decade, has risen over the last year to about 2.35%. Because inflation-linked Treasuries tied to consumer prices tend to exceed the Federal Reserve’s gauge -- the personal consumption expenditure index -- by about 40 basis points, that shows the market sees 2% inflation close to the Fed’s target.

That’s not to say bonds are totally in line with the Goldilocks narrative. Ten-year U.S. real yields remain deeply negative, showing serious concerns about growth. Many are watching slowing manufacturing output from China, and worrying.

Another metric betrays some concern inflation may be more lasting than central bankers suggest. The premium that short-term bond-market measures of inflation expectations have over longer term -- a gap that was touted as backing for transitory -- is now about a fifth of what is was back in June.

Recent upside surprises in either factory or consumer price data from the U.K. to Canada to China lend weight to the idea that not all price pressures are transitory. The Cleveland Fed measures of trimmed mean inflation, which excludes the components each month that have shown the most extreme moves in either direction have jumped as of late.

Yet even the market’s Cassandras aren’t ready to call a return to 1970s queues for the gas station and crippling price rises.

Strategists at Bank of America Corp. are among those with the most pessimistic outlook -- and even they’re just calling for growth undershoots and inflation overshoots.

“We don’t mean the double digit inflation and the recession we saw the 1970s,” said Athanasios Vamvakidis, Bank of America’s head of G-10 strategy. “We mean a scenario looking into next year in which growth surprises to the downside and inflation to the upside after the strong current base effects from the reopening fade.”