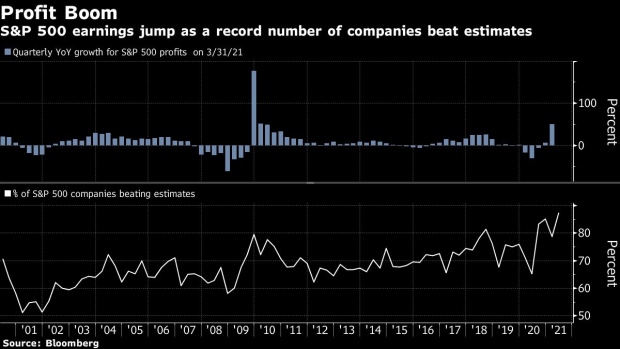 (Bloomberg) -- It’s all very simple. The economy isn’t strong enough for the Federal Reserve to taper stimulus, therefore stay-at-home tech shares will rally. And any efforts to heal the economy are likely to drive up inflation, meaning banks and airlines will benefit.

Such is the can’t-lose logic underpinning American stocks in May 2021, almost 14 months since the pandemic crashed the market and left an 8 million-job hole in the U.S. labor market. To strategists at JPMorgan Chase, now is no time to doubt equities -- as long as Fed Chair Jerome Powell and President Joe Biden are in charge of the recovery.

Anyone looking for confirmation need only recall Friday’s reaction to one of the largest downside misses on record for a U.S. employment report. Small caps surged, buoyed after President Biden used Friday’s numbers as justification for his multi-trillion fiscal aid package. The Nasdaq 100 also jumped as investors took April’s jobs whiff to mean that the Fed won’t be turning off the taps anytime soon, keeping rates low and helping to sustain sky-high tech valuations.

“It doesn’t hurt equities to know the Fed is still the backdrop with lower rates for longer,” Ryan Detrick, chief market strategist at LPL Financial. “The stay-at-home and the tech names are going to get a little bit of a bid here on worries about the reopening but I think it’s more of a near-term blip and the bigger cyclical names will still take the baton over the coming months.”

Every sector in the S&P 500 rallied in the aftermath, with tech vying with cyclical energy and industrial shares for the top spot. The Russell 1000 Value Index and its growth counterpart both ended Friday 0.8% higher, after value outperformed every day this week.

Meanwhile, JPMorgan strategists led by Marko Kolanovic are doubling down on the reflation trade. Just days after warning that many money managers need to quickly switch gears from their deflationary playbook or risk an “inflation shock,” Kolanovic recommended clients increase their tilt toward cyclical and value assets. He advised investors to cut holdings in cash and credit, using the money to buy commodities and stocks.

“We expect a strong pickup in inflation this year, which the market will likely be slow to recognize and is poorly positioned for,” Kolanovic and his colleagues wrote in a note Friday. “A combination of boomy global growth and significant bottleneck price pressures should keep inflation on an upward trajectory while most central banks remain committed to their very accommodative stances and are looking through the inflation pickups.”

And even for all the hand-wringing over inflation, the latest batch of quarterly reports suggests it’s already here and helping corporate America. Faced with rising prices for everything from lumber to oil to labor and computer chips, chief executive officers have cut costs and boosted prices for their products.

As a result, first-quarter income from S&P 500 companies is jumping five times as fast as sales, data compiled by Bloomberg Intelligence show. Based on actual results and analyst estimates for those yet to report, profits probably surged to an all-time high of $48.21 a share. That’s 13% above the record set in 2018 of $42.79.

The next test for the equity market’s cheer comes in Wednesday’s inflation data, which is expected to show that price pressures jumped by the most on an annual basis since 2011. But given that Fed chief Powell has said that the central bank will need to see a “string” of strong data before shifting their stance, it’s likely that April’s payroll miss was a big enough blow to keep them on the sidelines.

“It justifies the Fed, it keeps them from having their tapering discussion or thinking about raising rates,” said Ross Mayfield, investment strategy analyst at Robert W. Baird & Co.. “That by and large is supportive for equity markets.”