Stocks fell, capping the worst week since the outbreak of the pandemic roiled markets, with tech shares bearing the brunt of the selloff amid shaky company earnings and prospects for higher U.S. interest rates.

The S&P 500 closed below its 200-day moving average, a key technical level, for the first time since 2020. The tech-heavy Nasdaq 100 slid the most among major benchmarks Friday, led by a more than 20 per cent plunge in shares of streaming giant Netflix Inc. Bitcoin tumbled in an extended selloff for cryptocurrencies, briefly falling below US$38,000 to its lowest level in more than five months.

Volatility that has gripped markets this month showed little sign of letting up Friday, with the S&P 500 falling for a fourth day, extending losses in the period to 5.7 per cent for the worst, albeit shortened, week since March 2020. Option expirations of more than US$3 trillion helped add to market turbulence.

“This is the longest short week, I think, in history, right?” Jay Pelosky, founder and president of TPW Investment Management, said on Bloomberg TV. “It’s only been a four-day week and it feels like it’s been two weeks rolled into one.”

The U.S. company reporting season so far has been uneven, highlighting the risk that it may fail to enliven animal spirits in the stock market. While Netflix’s disappointing subscriber outlook sent its shares tumbling, while Peloton Interactive Inc. suggested it was poised to rebound after the darling of the stay-at-home trade was hit by a report of temporary production halts. 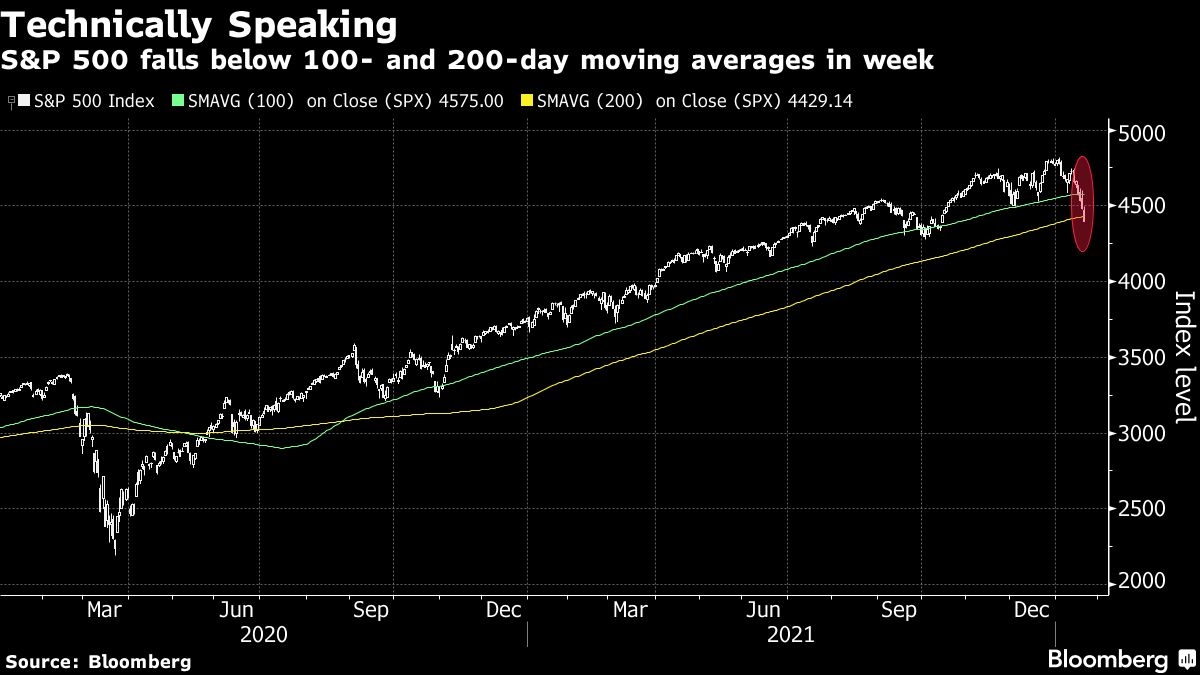 Markets are also bracing for rate liftoff by the Federal Reserve. Economists surveyed by Bloomberg expect policy makers to raise interest rates in March for the first time in more than three years and shrink their balance sheet soon after. Geopolitical tensions are also adding to the jitters. A report that Washington is allowing some Baltic states to send U.S.-made weapons to Ukraine stoked concerns about a standoff with Russia.

“There are plenty of risks in the global economy, including geo-political events,” wrote Ethan Harris, head of global economics at Bank of America Global Research. “However, in our view, the biggest near-term risk is right in front of us: that the Fed is seriously behind the curve and has to get serious about fighting inflation.”

Demand for havens pushed the 10-year Treasury yield down more than 10 basis points in three days to 1.76 per cent, leaving the rate lower on the week, the first decline for the period in five weeks.

The selloff in equity markets has volatility indexes pricing more turbulence near term than in the future. The setup, known as an inverted VIX. Such an inverted curve has occurred four other times in the past year and all coincided with market bottoms.

“We’re all going to breathe an extra sigh of relief once this session finally closes and then we can put an end to this week, because it’s been painful all around,” said Adam Phillips, managing director of Portfolio Strategy at EP Wealth Advisors in Torrance, California.