U.S. equities ended a five-day winning streak on Tuesday as megacap technology stocks including Apple Inc. and Microsoft Corp. tumbled ahead of their earnings reports.

The tech-heavy Nasdaq 100 posted its biggest drop in more than two months as all three of the major American equity indexes fell from all-time highs. The Hang Seng Index sank the most since May 2020 as speculation swirled that U.S. funds are offloading China and Hong Kong assets.

The rout in China is adding to global market unease, with investors already concerned about the economic recovery, given the rise in the COVID-19 delta variant and central-bank talk of tightening policy. While a strong start to the earnings season has helped U.S. equities, investors have been anticipating further catalysts from this week’s Federal Reserve meeting and the updates due today from Apple, Microsoft and Alphabet Inc., which are among the top five heaviest-weighted stocks in the S&P 500. Shares of all three were among the biggest drags on the index on Tuesday. 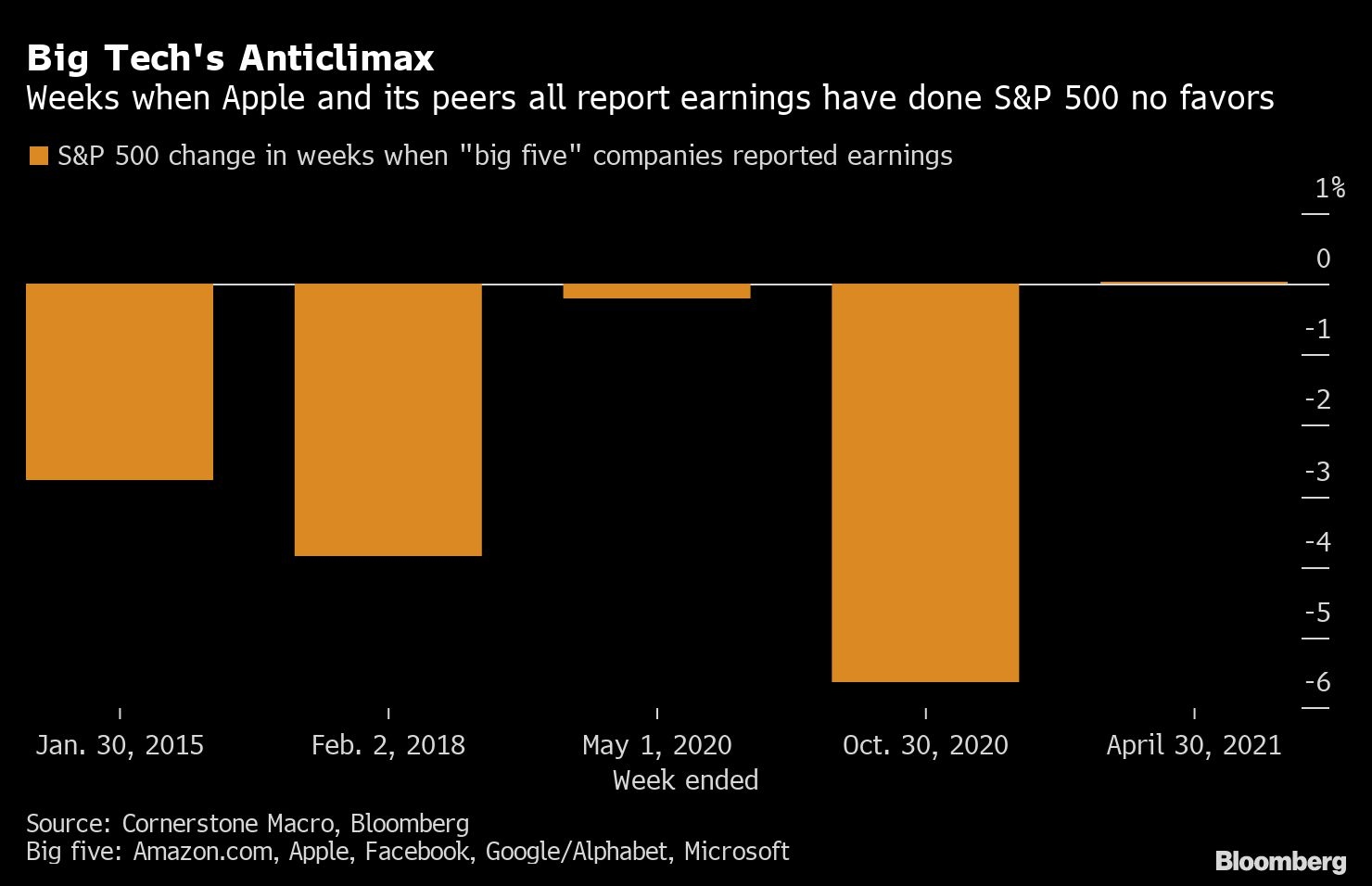 “The turmoil in tech stocks in China is finally bleeding into U.S. tech stocks,” said Chris Murphy, Susquehanna International Group’s co-head of derivatives strategy. “We might also be seeing investors taking profits ahead of the big tech earnings later this week. I am concerned investors will lighten up in general after those earnings this week as we head into a seasonably weak period for equities.”

Shares of Amazon.com Inc. and Facebook Inc., which are set to report earnings later this week, also tumbled. Nine of the 10 stocks in the NYSE FANG+ index, which includes the biggest U.S.-based tech companies as well as China’s Baidu Inc. and Alibaba Group Holding Ltd., ended the session lower.

Forecasts indicate that S&P 500 earnings growth should set new highs during the second-quarter season, and so far more than 80 per cent of the companies that have reported their results beat Wall Street’s sales and profit estimates. That’s helped to offset concern about inflation and the spread of COVID-19. At the same time, it has some investors thinking this might be as good as it’s going to get for a while.

“We probably are at peak earnings,” Victoria Fernandez, chief market strategist at Crossmark Global Investments, said on Bloomberg TV. “They have easy comps so that’s helping. Plus they’ve been able to start putting through some of the price increases.”

In China, the yuan slid to its lowest since April against the dollar and bonds slumped, indicating mounting worries that Beijing’s crackdown on education, food delivery and property sectors could expand to other industries. Meanwhile, a slump in U.S.-listed Chinese shares accelerated.

Elsewhere in markets, Treasuries rose with the yen amid demand for haven assets. Bitcoin traded around US$38,000 after briefly rising above US$40,000 overnight.