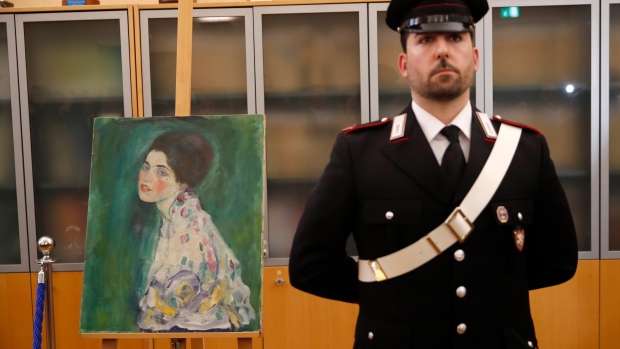 An Italian Carabiniere, paramilitary police officer, stands near a painting which was found last December near an art gallery and believed to be the missing Gustav Klimt's painting ‘Portrait of a Lady’ during a press conference in Piacenza, Italy, Friday, Jan. 17, 2020. Art experts have confirmed that a stolen painting discovered hidden inside an Italian art gallery's walls is Gustav Klimt's "Portrait of a Lady," Italian prosecutors said Friday. A gardener reported finding an art work inside a bag last month while clearing ivy at the Ricci Oddi Modern Art Gallery in the northern city of Piacenza. “Portrait of a Lady” disappeared from the gallery during renovation work in February 1997. , AP Photo/Antonio Calanni

The mystery surrounding a US$66 million painting deepened last month after it resurfaced in the walls of an Italian gallery nearly 23 years after it was reported stolen.

Municipal officials announced on Friday that the painting by Austrian symbolist artist Gustav Klimt, created between 1916-1917, is authentic.

Gardeners at the Ricci Oddi Gallery of Modern Art in northern Italy’s Piacenza province discovered Klimt’s “Portrait of a Lady” in a bag within a wall while they were clearing ivy, the New York Times said.

ABC News reported last month that the painting was believed to have been stolen in 1997 while it was being moved into another building. Suspicion surrounding its disappearance resurfaced in 2016 when a trace of DNA was found on its frame, which investigators discovered on the roof.

On Friday, it was declared authentic by experts following technical testing of the work, municipal mayor Patrizia Barbier said in a statement.

“It is news of historical importance for the artistic and cultural community and for the city of Piacenza,” she said.