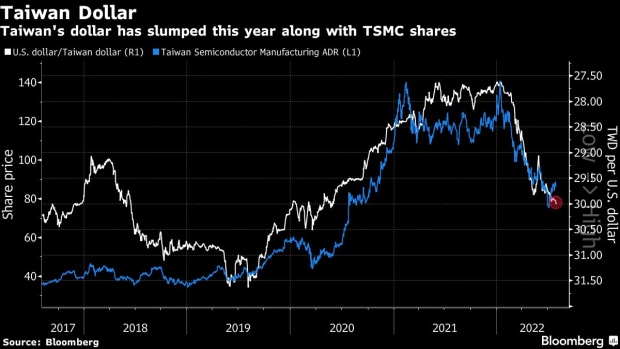 (Bloomberg) -- The immediate market impact of Nancy Pelosi’s visit to Taiwan may be fading, but it has left fund managers rethinking how to navigate the fraying relations between the world’s two largest economies.

From an accelerated US-China decoupling to an additional pressure point for fragile supply chains or speculation over whether Beijing might weaponize its vast holding of Treasuries, investors have been outlining how the US House Speaker’s trip may have a long-term market impact.

Pelosi’s trip has once again put the spotlight on market risks riding on intensifying competition between the US and China, and how that impacts strategic investments in Chinese markets, global commodities and haven assets should that relationship worsen.

“This issue will linger far longer than the market’s attention span will allow,” said Michael Every, head of Asian financial market research at Rabobank in Hong Kong. “Yet geo-strategists are largely united in the view that we are still worryingly close to a potential Fourth Taiwan Strait Crisis.”

Haven assets whipsawed Wednesday as concern about the level of military response from China dissipated and Treasuries sold off on hawkish comments from Federal Reserve officials. Most stocks and equity futures struggled for traction, though Chinese markets ended the day weaker.

The Importance of Pelosi and Taiwan on Bond Swings: John Authers

Investors continued to parse headlines for clues as to how China may retaliate, beyond military exercises and some Taiwan trade restrictions. Tuesday’s surge in Treasury yields triggered debate over what the nation would do with its near $1 trillion pile of US government bonds.

“Given the magnitude of the selloff, it was only a matter of time before speculation that China was using its significant Treasury holdings in retaliation for Pelosi’s visit,” said Ian Lyngen, a strategist at BMO Capital Markets in New York. “In the event this is the case, which we doubt, the bearishness should be limited as the near-term flow influences are overshadowed by the negative impact on the global macro outlook.”

The amount of US debt held by China shows the extent to which both economies are intertwined. Yet, their relationship has changed in the past six years with disputes on trade, technological competition, security and the potential delisting of Chinese firms in the US.

“The official return of the US influence in Asia-Pacific will inevitably accelerate US-China decoupling,” said Xiadong Bao, a fund manager at Edmond de Rothschild Asset Management in Paris. “Given it’s an evolving event, investors should brace for a test of nerves which may implicate high market volatility in the near-term.”

Other analysts also mapped out a longer-run view of how this week’s events may prove to be a seminal moment in Asia-Pacific history and potentially alter asset-allocation in the region. Taiwan is a critical global supplier of semiconductors and other high-tech goods.

Huang Huiming, a fund manager at Nanjing Jing Heng Investment Management Co., points out the possibility of so-called “salami tactics” by Beijing -- a piecemeal approach to divide and conquer an opposition -- and how this may impact already choked-up supply chains.

“Looking closely at the exercise zones, this is the nearest to the island ever and encircles it -- all military operations are at first disguised as drills,” he said. “We might be concerned if the drills become longer and more intense to impact supply chains, but there’s no sign of that happening now.”

When everything looks this uncertain, sometimes the biggest trades include buying the traditional havens: Treasuries and the dollar.

That’s the view of Jessica Amir at Saxo Capital Markets who says the latest tensions are only going to further fray investors’ nerves, spurring safer assets to outperform.

“Right now we think the tone has been set for equities for August and the rest of the year,” she said. “Geopolitical tensions will rise. We also see the return to safe havens, and the dollar to see increased buying.”

Her outlook is shared by AMP Capital Markets’ chief economist Shane Oliver, who sees gains for Treasuries to gold should frictions continue to worsen. “Longer-term it signals a further escalation in cold-war tensions between the West and China/Russia, which means higher risk premiums,” he said.

In Zurich, fund manager Jian Shi Cortesi see parallels in market outcomes between Newt Gingrich’s trip to Taiwan in 1997 and Pelosi’s this week. Back then, the Hang Seng Index and Taiwan’s bourse both fell before the visits, but rebounded afterward. This time, stocks in China, Hong Kong and Taiwan all dropped before Pelosi’s trip.