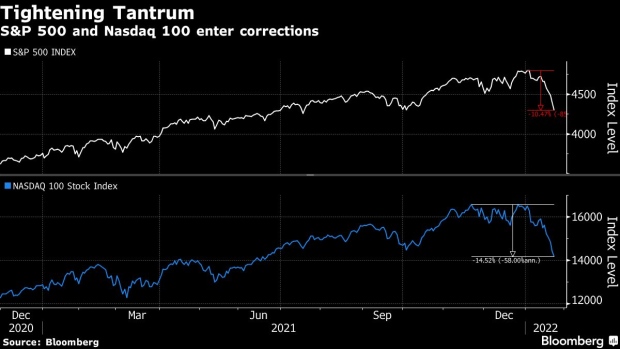 With the S&P 500 sliding more than 10% from recent records, bears from the likes of Mizuho International Plc and Bank of America Corp. warn of fresh selling to come as growth momentum eases just as the Federal Reserve amps up borrowing costs.

“There’s probably more downside over the next few months as the market adjusts to the reality of the Fed removing accommodation, earnings slowdown and much less federal stimulus,” said Ed Clissold, the chief U.S. strategist at Ned Davis Research, who late last year predicted a double-digit drop in stocks and today is warning of a correction on the order of 20% from the early January peak.

The S&P 500 could slide another 12% as a “tightening tantrum” gathers pace, according to Mizuho strategists who came into 2022 warning of a 10% to 15% plunge in the second quarter, if not sooner.

A slew of factors -- stretched valuations, tech-heavy indexes and rising yields -- is playing out in a rout that shows few signs of abating.

Investors are coming to terms with a more hawkish Fed that won’t step in to smooth over every market hiccup. They expect policy makers to plow on with higher rates, with a quarter-point hike in March and close to a full percentage point rise for the whole of 2022.

For many, the direction of travel is troublesome for rate-sensitive investing styles.

“We can see this downward pressure on the equity markets being relatively sticky unless there is a catalyst for a much less hawkish Fed and general global central bank reaction,” said Peter Chatwell, head of multi-asset strategy at Mizuho. “The market stress scenario is what we think is happening now.”

Still, bearish stock predictions on Wall Street have famously misfired in the bull era, with calls on market timing lashing the great and the good in the analyst community.

A toxic mix of decelerating economic growth and a tightening of monetary policy is vindicating the pessimists. The deteriorating backdrop is starting to show on quarterly earnings reports, which have so far served as reassuring beacon against any doomsday predictions.

After unprecedented successive jumps in earnings growth, the guidance from S&P 500 companies so far for the months ahead is “disappointing” and the information offered by managers in earnings calls is “concerning,” according to a note by Goldman Sachs Group Inc. strategists on Monday.

“The froth is coming out of an equity market that simply got too extended on valuation,” Mike Wilson, a long-term bear at Morgan Stanley, wrote Monday.