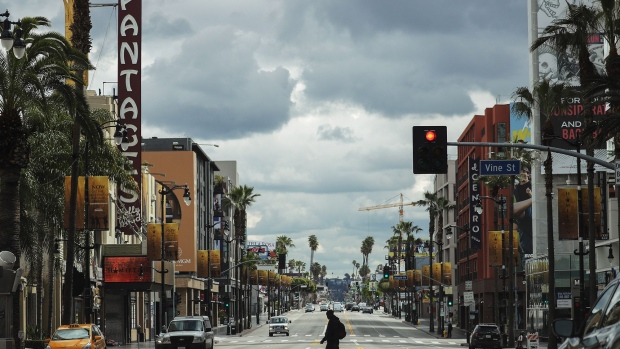 With more than two-thirds of the U.S. population ordered to stay home amid the coronavirus pandemic, it’s tougher for burglars to find an empty house to target. But the cooped-up residents seem more likely to fight each other.

That’s what crime statistics show in major U.S. cities where residents are spending almost all their time inside.

The rapidly spreading infections from the coronavirus, with New York City as now the epicenter, have most Americans hunkering down. About 217 million people in at least 23 states, 17 cities and one territory were being urged to stay home as of Friday.

In Los Angeles, the number of burglaries and theft from motor vehicles, the most prevalent crime in the car-loving city, was down 24 per cent. In areas such as Hollywood, car break-ins fell more than 40 per cent, according to police. Burglaries dropped almost 20 per cent in New York and rapes were down by more than half; there was one murder, compared with eight in the earlier week. (The pandemic can offer criminals opportunities. In Europe, a Dutch museum that’s closed to check the virus’s spread said Monday a Van Gogh was stolen in an overnight raid, the AP reported.)

The changes in violent crime were less pronounced in other cities.

In Chicago, there’s been a significant reduction in vehicle and pedestrian stops by police, Charlie Beck, the city’s interim police superintendent, said at a press conference Tuesday.

“All of this indicates to me that people are doing what we ask,” Beck said. “That they are staying home, that they are by and large creating good social distance, that our police officers are only focusing on things that have a direct impact on public safety and making sure that we all get through this together.”

A pedestrian crosses the near empty California Street in San Francisco on March 20.
In San Francisco, larceny-theft, which includes shoplifting and bicycle theft, was down 30 per cent during the first three weeks of March versus the same period a year earlier.

But with people stuck indoors enduring the stress of an unprecedented public-health crisis and worrying about jobs disappearing, domestic squabbles are rising.

In Seattle, police got 614 domestic violence calls in the first two weeks of March, a 22 per cent increase from a year earlier.

“The vast majority were for a DV disturbance, which means there is no arrest because it was just an argument where the police ended up responding,” Detective Patrick Michaud of the Seattle police department said in an email, referring to domestic violence calls. “No assault. No property damage. No additional crime. Just an argument.”

“Losing a job and kids at home due to school closures can be triggers for domestic violence,” Stephan said in a statement. “We want people who are seeing warning signs of abuse or who are being abused to know that we stand ready to help them and that they shouldn’t suffer in silence.”

Los Angeles-based lawyer Lisa Bloom said she’s received dozens of calls in recent weeks from women who have been in violent confrontations with their boyfriends or husbands.

“And they are all coronavirus related,” Bloom said in a phone interview.

In some instances, fights between couples erupted over the state’s stay-at-home order, with people allowed to leave their homes only for essential errands or exercise. Last week, Bloom said, she got a restraining order for a woman who was beaten up by her partner after she complained he was going out for hours.