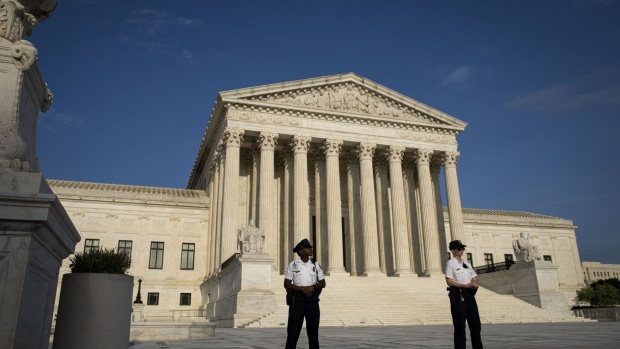 (Bloomberg) -- The US Supreme Court struck down a New York law that required people to show a special need to carry a handgun in public, ruling for the first time that the Second Amendment protects gun rights outside the home.

The 6-3 ruling could mean more guns in public places in some of the most populous US cities. New York was one of at least six states -- along with California, Massachusetts, New Jersey, Maryland and Hawaii -- with laws that prevented most people from legally carrying a handgun.

“We know of no other constitutional right that an individual may exercise only after demonstrating to government official some special need,” Justice Clarence Thomas wrote for the court.

The decision follows a series of mass shootings, including rampages that left a total of more than 30 people dead at a Buffalo, New York, grocery store and an Uvalde, Texas, elementary school. The Senate is moving toward approving new gun-safety measures in response to those killings.

The ruling was the court’s biggest gun-rights decision in more than a decade. It underscored the impact of the three justices appointed by former President Donald Trump: Justices Neil Gorsuch, Brett Kavanaugh and Amy Coney Barrett, all of whom joined the majority.

“New York’s legislature considered the empirical evidence about gun violence and adopted a reasonable licensing law to regulate the concealed carriage of handguns in order to keep the people of New York safe,” Breyer wrote for the group.

Shares of gun makers and distributors rose to session highs Thursday after the ruling. Smith & Wesson Brands Inc. jumped as much as 7.6%, while Sturm Ruger & Co. climbed 2.7% and Ammo Inc. advanced 3.5%.

The New York law required people to show “proper cause” to get a concealed-carry license. Although the statute didn’t define that phrase, New York state court rulings said applicants needed to show a need for self-protection that distinguished them from the general public. The law gave local officials broad discretion to decide whether the standard has been met.

Opponents said the practical effect was to leave the vast majority of people in the state without the right to carry a handgun in public. The state generally forbids open carry.