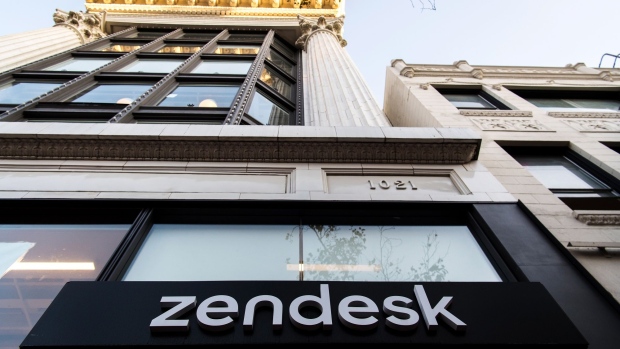 (Bloomberg) -- The parent of polling software company SurveyMonkey had interest from at least two other potential buyers before it decided to pursue an all-stock $4 billion takeover by Zendesk Inc.

Momentive Global Inc. made the disclosure in a regulatory filing Monday. One of those interested, referred to as Party A in the filing, had put forth a non-binding proposal to acquire the company for $27 a share in cash. Another, referred to as Party D, indicated that it might have been willing to increase its offer before Momentive’s board decided to sell to Zendesk.

Another, known as Party H, said it might be interested in partnering with another financial sponsor to acquire the company.

In all, Momentive said it spoke to 18 potential strategic or financial buyers during the sale process. Six strategics and two financial sponsors decided not to proceed, the filing shows. Private equity firm Permira was among the final bidders for the company, Bloomberg News reported last month.

The multitude of potential buyers could pose a challenge for Zendesk and Momentive to close the deal, which requires the approval of shareholders at both companies. Both Zendesk and Momentive have been under pressure by some of their investors to abandon the deal after their share prices tumbled following the Oct. 28 announcement.

Momentive said in the filing Monday that it decided to proceed with the transaction because of the uncertainty about whether it could reach a deal with Party A, as well as the uncertainty around whether Party D would boost its offer. A deal with Zendesk would allow it to continue to execute on its long-term plans as an independent entity, and participate in the upside of the combined company, among other benefits, it said in the filing.

Under the terms of the deal, Momentive shareholders will receive 0.225 shares of Zendesk for every Momentive share they own. That translated to about $28 a share at the time of the announcement in October. The subsequent selloff has lowered the value of the transaction to about $22 a share, or $3.3 billion.

Since the deal was announced, Momentive’s shares have fallen about 23%, while Zendesk has dropped 18%.

Two Momentive investors have already gone public in their opposition, including activist investor Legion Partners Asset Management. Legion, which owns a 1.4% stake in Momentive, has said the board of the company is in need of a “significant upgrade.”

Another activist, Jana Partners, which said it owns a stake in Zendesk, has also demanded the company abandon the deal, arguing last month in a letter to the board that the proposal lacks financial merit, and has already wiped out $3 billion in equity value. The New York-based firm argued there are far better ways for the company to create shareholder value.

(Updates with share declines in eighth paragraph. A spelling of SurveyMonkey was corrected in an earlier version of this story.)