A corporate logo sits on a Huawei Technologies Co. NetEngine 8000 intelligent metro router on display during a 5G event in London, U.K., on Thursday, Feb. 20, 2020. Huawei said at the event it currently has 91 contracts for 5G, with 47 of those in Europe. Photographer: Chris Ratcliffe/Bloomberg , Bloomberg

Sweden has banned Huawei Technologies Co. and ZTE Corp. from gaining access to its fifth-generation wireless network, adding to the increasing number of European governments forcing local telecom companies to shift away from Chinese suppliers.

The Swedish Post and Telecom Authority said in a statement Tuesday that the “influence of China’s one-party state over the country’s private sector brings with it strong incentives for privately owned companies to act in accordance with state goals and the communist party’s national strategies.”

The authority said that the two Chinese technology giants’ equipment must be removed from existing infrastructure used for 5G frequencies by January 2025.

The U.S. has described Huawei as the “backbone” of surveillance efforts by the Chinese communist party, and is pressuring European governments to block the technology company from gaining access to 5G networks. The U.K. has already imposed an outright ban on Huawei’s 5G equipment, while German Chancellor Angela Merkel has so far hesitated to follow suit.

The exclusion is “unfair and unacceptable” and “simply based on groundless presumption,” and would hurt competition, Huawei said in emailed comments. A representative for ZTE didn’t immediately respond to a request for comment outside of regular business hours.

Sweden should provide open and nondiscriminatory business conditions for Chinese companies based on market rules, the Chinese embassy in Sweden said in a statement. Huawei has previously denied being a security threat, and Chinese officials have labeled the bans by European governments as “gross interference.” 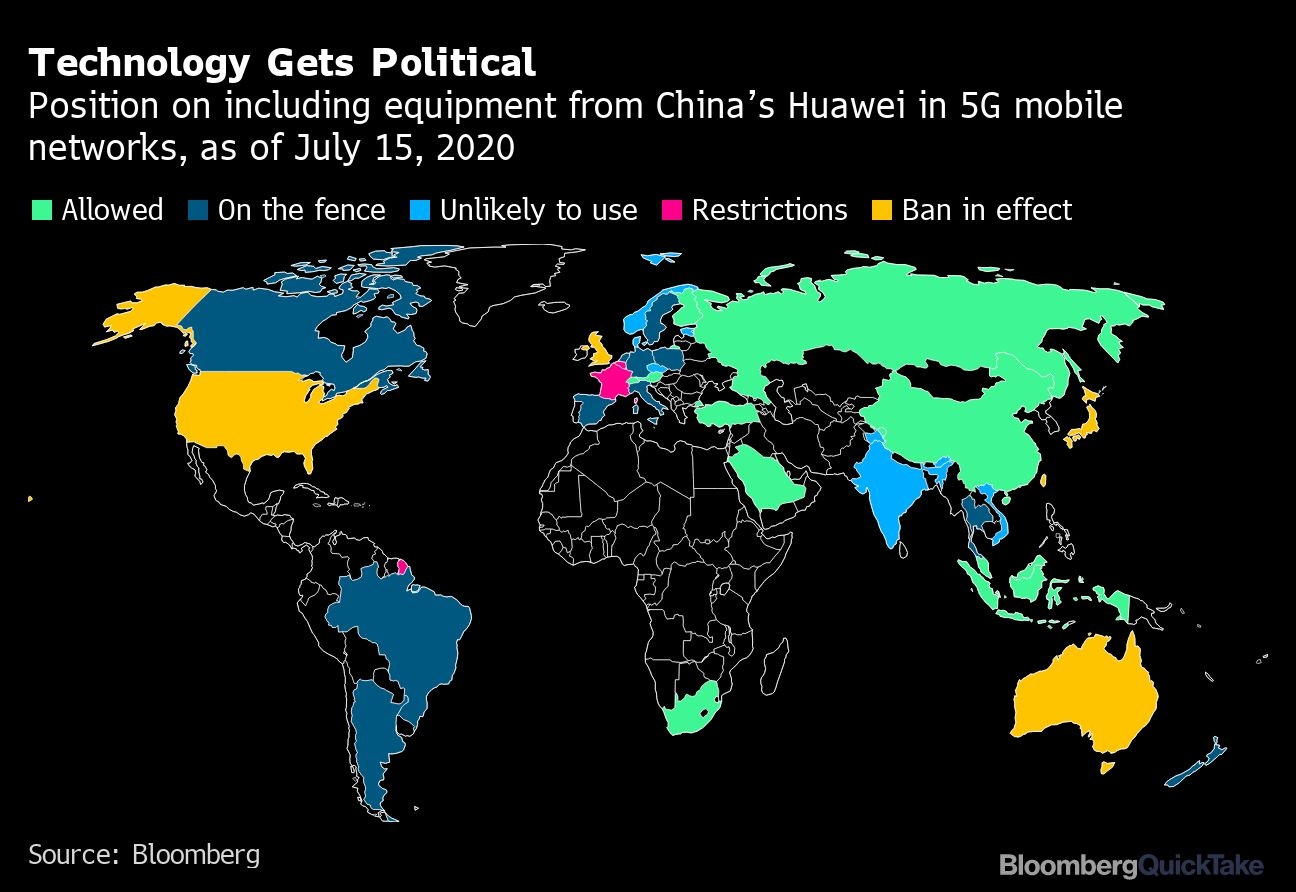 Finland’s Nokia Oyj and Sweden’s Ericsson AB have been the major beneficiaries of the ban on using Huawei equipment, with the two companies forming an effective duopoly on 5G gear. In the U.K., many carriers now need to swap out some of their Huawei 4G technology for Nokia and Ericsson equipment before installing 5G.

The hostility from the U.S. and its allies has damaged the meteoric rise of Huawei, China’s biggest tech firm, which has helped build 5G networks in more than 10 countries and was expected to do the same in another 20 this year. Customers have now begun to shift to other suppliers. Last month, Nokia extended its relationship with BT Group Plc to supply the British phone company with 5G gear.

ZTE, Huawei’s much smaller rival, almost collapsed after the U.S. Commerce Department banned it from buying American technology for three months in 2018. Both ZTE and Huawei are set to be shut out of India’s plans to roll out its 5G networks.

A representative for ZTE did not immediately respond to a request for comment outside of regular business hours.

Tele2 AB, Sweden’s second largest telecom company, has used Huawei for its 4G equipment, and noted on its earnings call Tuesday that the Chinese company was “doing a great job” but they had planned for the possibility of a ban.

PTS granted access to new 5G installations to Hi3G Access, Net4Mobility, Telia Sverige and Teracom. The approval means the companies can participate in Sweden’s 3.5 GHz and 2.3 GHz auctions, which are key to its 5G build-out.

--With assistance from Thomas Seal.