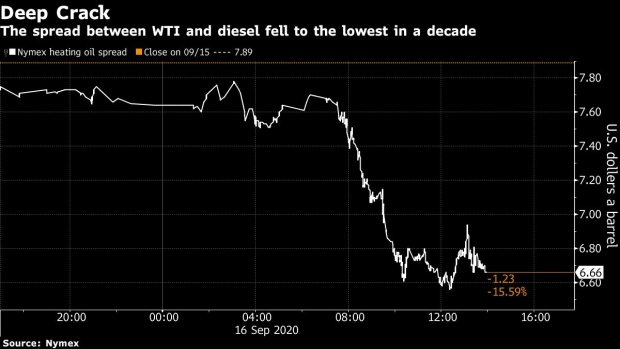 Fuel storage tanks containers stand at the NuStar Energy LP Selby Terminal in Crockett, California, U.S., on Thursday, April 23, 2020. Crude oil rose at the end of a dramatic week that saw prices in New York plunge below zero for the first time in history. , Bloomberg

(Bloomberg) -- The oil market has a diesel problem and it’s not letting up.

While crude stockpiles in the U.S. are sitting at the lowest since April, supplies of distillates, which include diesel, heating oil and jet fuel, are continuing to swell and skyrocketed to the highest level for this time of year in U.S. government data going back to at least 1991. At the same time, demand for the fuel, often viewed as an economic barometer, is at the lowest since late July.

It’s a stubborn glut that is presenting a headache for refiners that need to meet demand for gasoline, but also require an outlet for the diesel that will inevitably be produced as they ramp up output. A lull in air travel due to the coronavirus pandemic has also caused jet fuel to pile up, contributing to the growing supply.

The result is brutal for companies trying to make money turning crude into gasoline and diesel. A key metric that measures diesel’s premium to West Texas Intermediate crude futures, known by traders as the diesel crack spread, plummeted to $6.56 a barrel after an Energy Information Administration report on Wednesday, the lowest since June 2010.

The slide in the crack is the “worst possible scenario for refiners,” Bob Yawger, director of the futures division at Mizuho Securities USA, wrote in a note.

Refiners have little incentive to run their plants harder in the wake of weak margins and record distillate inventories. It also doesn’t bode well for crude futures.

“If they don’t crank up the run rate, they will never burn off the crude oil overhang already in storage,” Yawger said. It’s “bearish for crude oil prices.”