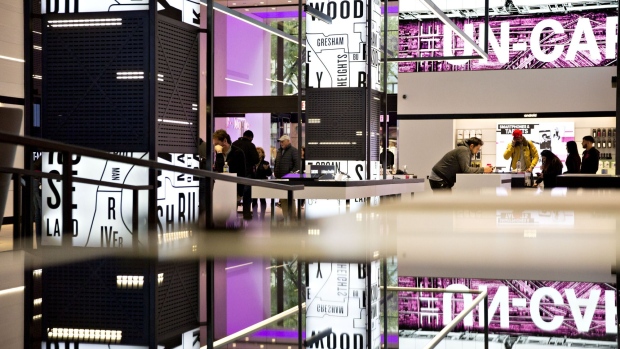 Employees assist customers at a T-Mobile US Inc. store in Chicago, Illinois, U.S., on Friday, Oct. 21, 2016. T-Mobile US Inc. is scheduled to release earnings figures on October 24. , Bloomberg

(Bloomberg) -- Preferred pronouns have crossed into a new frontier: retail.

T-Mobile US. Inc. announced Wednesday that it would let its store personnel add their gender pronouns -- say, “she/her/hers” or “they/them/theirs” -- to their name tags. Retail employees also can add “ask me my pronouns” to the badges.

It’s part of a broader push in corporate America to make transgender and gender nonconforming workers feel more welcome. Name tags with preferred pronouns are already used at conferences, and companies such as IBM Corp. let workers list their preferences in employee directories.

“This is just another way for employees to express who they are, in addition to already having the option to add their military affiliation (veteran or active duty), and up to four languages that they speak,” T-Mobile said in a blog post.

The wireless carrier made the change after an email from a store manager, Tiffanie Moton, according to the blog post. She brought the issue to Jon Freier, T-Mobile’s executive vice president of consumer markets.

“Tiffanie was inspired by a coworker who was transitioning, who did not want to be referred to as he or she,” T-Mobile said. “Tiffanie realized that a simple addition to name tags would help this employee from being misgendered and is an easy solution to bringing up the pronoun conversation.”

T-Mobile also is encouraging employees to add pronouns to email signatures and “kick off meetings” by sharing them, said the company, which is based in Bellevue, Washington.

To contact the reporter on this story: Nick Turner in Los Angeles at nturner7@bloomberg.net

To contact the editors responsible for this story: Nick Turner at nturner7@bloomberg.net, Philip Gray, Rebecca Greenfield