Biden doesn't have the authority to cancel Keystone XL: Attorney general of Montana

TC Energy Corp. is officially closing the book on Keystone XL, months after U.S. President Joe Biden revoked the presidential permit for the controversial pipeline project as one of his first acts in office.

In a release Wednesday, TC Energy said that after a comprehensive review of its options and consultations with the government of Alberta, it had terminated the project. The company booked a $2.2-billion writedown on the pipeline earlier this year.

“We value the strong relationships we’ve built through the development of this project and the experience we’ve gained. We remain grateful to the many organizations that supported the project and would have shared in its benefits, including our partners, the Government of Alberta and Natural Law Energy,” TC Energy President and Chief Executive Officer François Poirier said in the release.

The Albertan government was a key backer of Keystone XL, striking a deal for a $1.5-billion equity investment in the project in 2020 and offering $6 billion in loan backstops for 2021. That investment came even amid expectations Biden would make good on his word and cancel the permit for the project, which was revived by his predecessor Donald Trump.

In a release Wednesday, Alberta Premier Jason Kenney said his government and TC will continue to explore avenues to recoup the province’s investment in the project, and reiterated his opposition to the permit revocation.

“We remain disappointed and frustrated with the circumstances surrounding the Keystone XL project, including the cancellation of the presidential permit for the pipeline’s border crossing,” Kenney said.

“We will work with our U.S. partners to ensure that we are able to meet U.S. energy demands through the responsible development and transportation of our resources.”

The Albertan government reiterated Wednesday that the cost of backing the project is expected to be around $1.3 billion, in line with its estimate outlined in the most recent provincial budget.

Keystone XL would have increased Canadian export capacity by 830,000 barrels per day, running from Hardisty, Alta. to Steele City, Neb.

While the project was ultimately scuttled by Biden, there were lingering questions about whether Canada would need the excess shipping capacity, given other pipeline expansions in the works. 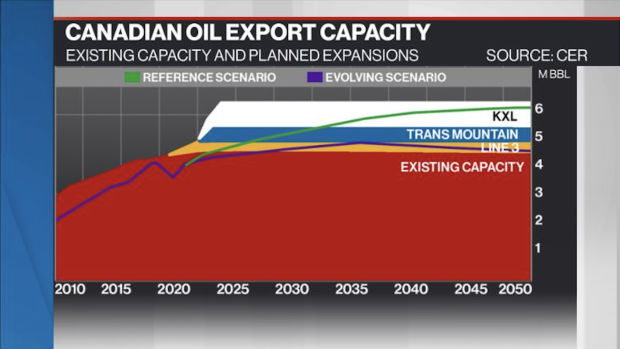 According to projections from the Canadian Energy Regulator, the combination of the Trans Mountain Expansion Project, Enbridge Inc.’s Line 3 replacement and Keystone XL – along with existing pipeline capacity – would exceed total Canadian crude export demand through the 2050 forecast horizon.