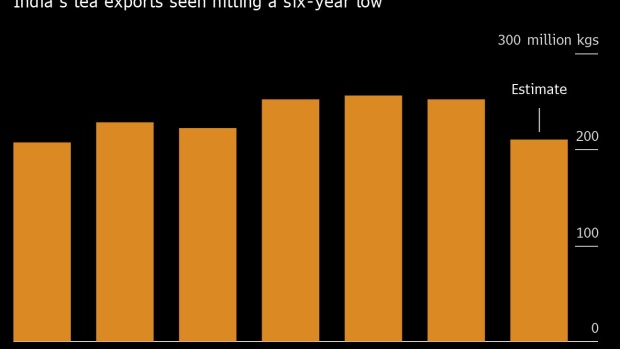 Heavy rains and the absence of tea pickers because of lockdowns have hammered production and sent local prices spiraling to records, while top buyers are turning to Kenya where the market has dropped, said Azam Monem, director at Mcleod Russel India Ltd., one of the country’s biggest growers.

Output in the world’s second-largest producer is set to shrink to the smallest in five years, falling 13% to about 1.21 billion kilograms, while exports will drop 16% to about 210 million kilograms, a six-year low, according to Monem.

The tea industry is going through a tough time, Monem said in an interview. Domestic production is falling after excessive rain in June and July and because lockdowns kept workers away from the plantations, while importers in the U.K., Egypt and the Middle East may switch to Kenya, he said.

Auction prices in the African nation have fallen after production of black tea climbed more than 40% in the first half from a year earlier on good weather, according to the Tea Directorate. By contrast, prices are at a record in the main growing areas of India, Monem said. Average prices jumped about 60% between April and early August from a year earlier, he said.

Still, even with the higher prices, lower volumes are hurting the cash flow of Indian tea companies, Kaushik Das, analyst at ICRA Ltd., said in a report.