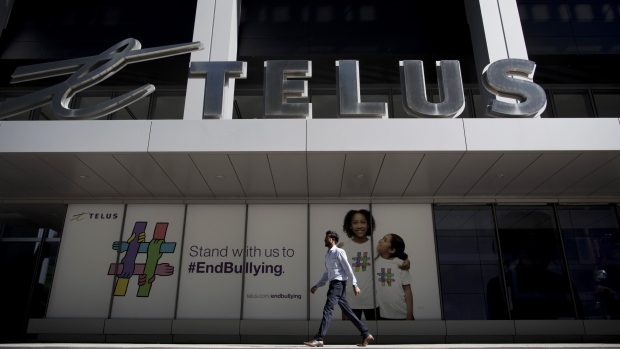 VANCOUVER -- Telus Corp. won't be raising its dividend until at least November because of the uncertain outcomes of the COVID-19 pandemic, chief executive Darren Entwistle told the company's virtual annual meeting Thursday.

His comments came after Telus announced a 19 per cent decline in first-quarter net income, which fell to $353 million, despite higher revenue compared with last year.

Entwistle, who has been CEO of Telus for most of the past 20 years, said the decision to defer the usual semi-annual increase to shareholder payments reflects the sensitivity to the impact that Telus employees and customers are feeling from the pandemic and economic downturn.

"This decision also reflects our commitment to effectively (manage) our resources to help our country and help out our fellow citizens in need as we work collectively to move past these uncertain times and into a period of economic recovery," Entwistle said in a speech to shareholders.

The company plans to continue investing in its communications infrastructure but also achieve positive cash flow in line with its original 2020 guidance.

He added that the company hopes to provide revised guidance about its 2020 financial prospects after a board meeting in late July.

Earlier Thursday, Telus said it would maintain its quarterly dividend at 29.125 cents per share.

Telus reported its first-quarter profit fell as investments in its networks and an increase in acquisition-related accounting expenses more than offset growth in earnings from its core communications business.

Analysts had estimated Telus would have 35 cents per share of adjusted earnings with nearly $3.68 billion of revenue, according to financial markets data firm Refinitiv.

The Vancouver-based company provides internet, phone and landline video services in hard-hit Alberta, and other parts of the country. It operates one of Canada's three national wireless networks with brands Telus, Koodo and Public Mobile.

Unlike its main wireless competitors Bell and Rogers, Telus doesn't have a media business but it does provide technology and services to medical professionals and consumers through Telus Health and business support services through Telus International.