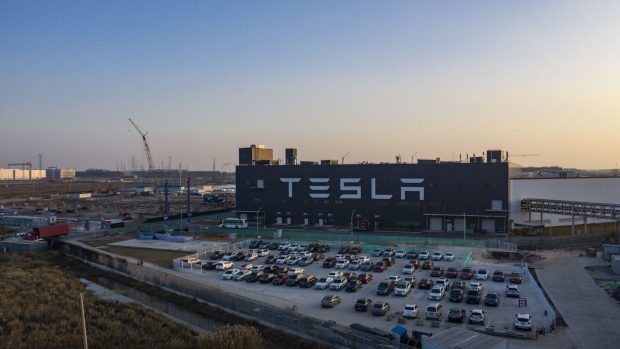 The Tesla Inc. Gigafactory in this aerial photograph taken in Shanghai, China, on Friday, Dec. 25, 2020. Tesla is coming to the end of its first year selling China-made cars with a commanding position in the world's biggest electric-vehicle market, but Elon Musk shouldn't rest on his laurels. , Bloomberg

(Bloomberg) -- Tesla Inc. has halted production at its plant in Shanghai due to supply issues, Reuters reported Tuesday, citing people familiar with the matter it didn’t identify.

It’s not clear when the supply issues can be resolved or when the electric carmaker can resume production in China, according to the report.

One of the problems stems from a shortage of wire harnesses from Aptiv Plc, which had to stop shipping supplies from a plant that supplies Tesla and General Motors Co. after infections were found among its employees, Reuters said.

Tesla representatives didn’t immediately respond to a request for comment.

Tesla’s China factory was shuttered for three weeks in April as Shanghai was plunged into lockdown in an attempt to halt community spread of Covid-19. The plant started up again in late April under a so-called closed loop system whereby workers live on site and are tested regularly.

Prior to the pandemic-induced halt on March 28, Tesla workers in Shanghai were working three shifts covering 24 hours, seven days a week. The workers in the current closed-loop system have been doing 12-hour shifts, six days a week.

Tesla’s Shanghai factory, which in regular times pumps out around 2,100 cars a day, remains challenged by component shortages, other people familiar said last month. The U.S. automaker only has inventory for just over two weeks based on its current closed-loop schedule and logistics are a major problem for many other parts.