Tesla is a stock that will be 4 digits as we go into next year: Wedbush Securities' Ives

Tesla Inc. shares are staging a comeback as investors expect the Elon Musk-led electric carmaker to navigate the crippling semiconductor shortage better than rivals that have been severely disrupted.

The stock gained as much as 3.8 per cent to US$875.26 on Monday in New York, before closing at US$870.11, up nearly 55 per cent from a March 8 low of US$563. That came after eight weeks of gains, its longest winning streak since before the Covid-19 pandemic roiled markets. The rebound makes it the sixth-biggest publicly listed company in the U.S., firmly ahead of Berkshire Hathaway Inc.

“We believe an evolving green tidal wave will push shares of Tesla higher despite the near-term chip shortage with 3Q earnings this week another positive catalyst,” wrote Wedbush analyst Daniel Ives in a note from Sunday.

Tesla shares have been steadily climbing in recent months, aided by strong quarterly results that showed the company fared much better than traditional carmakers in handling the semiconductor shortage. Deliveries for the third quarter beat all estimates. 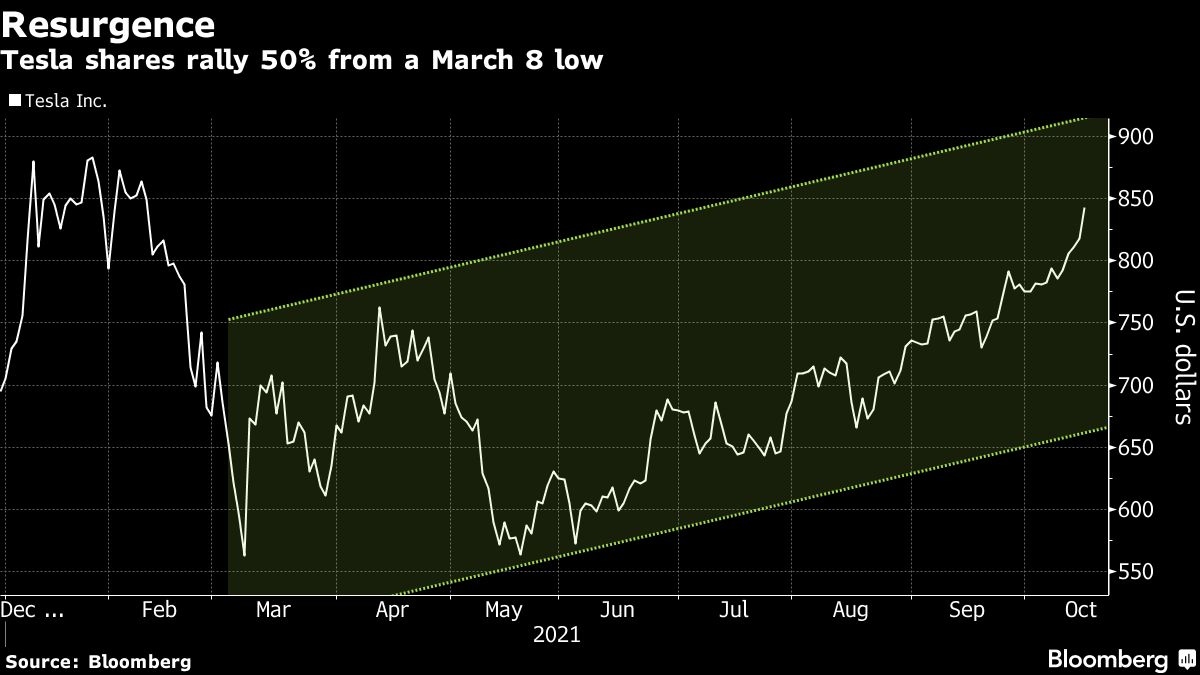 Telsa’s handling of the chip shortage even drew praise from one of its biggest competitors.

“One example for the speed of Tesla: They handle the chip shortage very well – the reason: they are developing their own software,” said Herbert Diess, chairman of Volkswagen AG in a LinkedIn post. “Within just 2-3 weeks they had a new software which allows to use different chips. Impressive.”

Tesla is set to report its third quarter earnings results on Oct. 20. It’s one of the very few global auto stocks to enjoy upward revisions in earnings estimates from analysts in the last one month, while most of the other automakers faced cuts due to the chip shortage.

Monday’s surge also helped Tesla shares more than catch up with the S&P 500 Index’s gains this year. As of Monday’s close, Tesla shares were up 23 per cent year-to-date, slightly ahead of the broader index’s 19.5 per cent advance. This had last happened in late February. 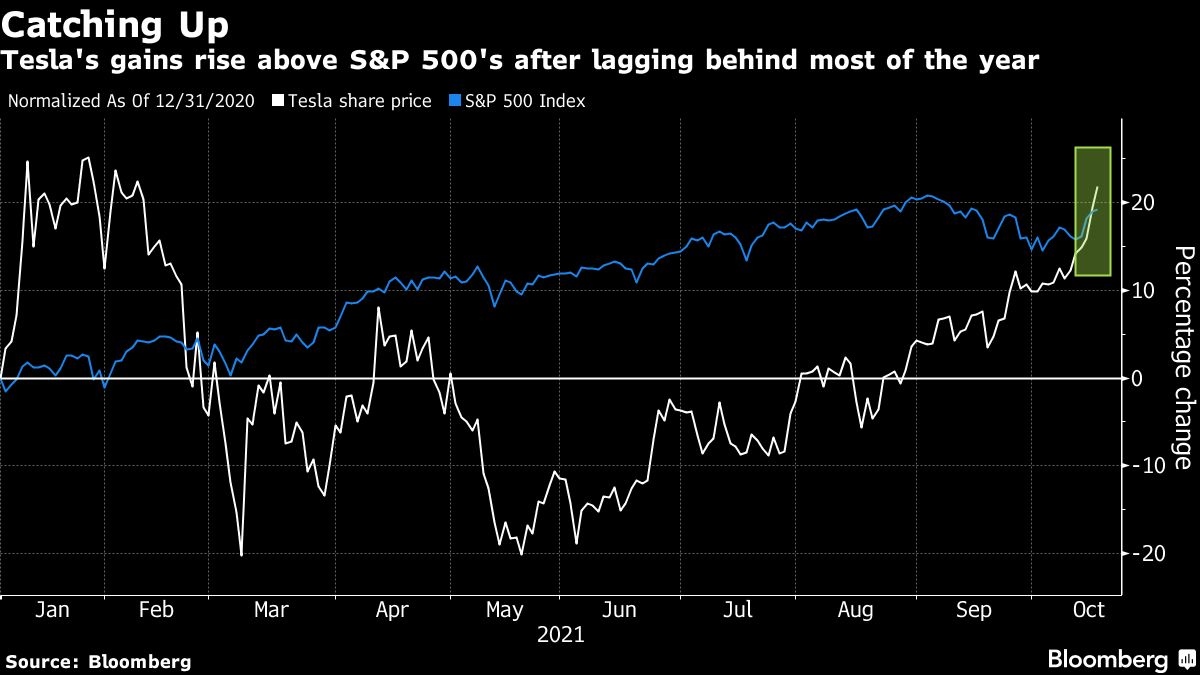 Still, some say Tesla’s trailblazing qualities in the EV race do not justify its valuation. The company is not only the biggest automaker in the world, its market capitalization of over US$845 billion is much bigger than all of the top car companies put together. Critics say the company’s market capitalization also fails to reflect the wave of competing cars from legacy auto companies expected to hit the market starting next year.

Competition is indeed heating up. After being on the sidelines for years, several major legacy auto companies have announced aggressive plans to build EVs and develop the required ecosystem that includes batteries and charging station networks.

Bullish investors and analysts, on the other hand, say Tesla should not be compared to its auto peers at all. It is rather more like a technology company, and is correctly valued accordingly.

Despite a big push from legacy automakers across the globe to develop electric vehicles, and the emergence of several new players, Tesla has still managed to maintain its dominance in the space, producing some of the best-selling EVs globally: Model 3 and Model Y.

“Taking a step back, with the chip shortage a major overhang on the auto space and logistical issues globally, these delivery numbers combined with this week’s likely earnings beat speaks to an EV demand trajectory that looks quite robust for Tesla heading into 4Q and 2022,” Ives wrote.