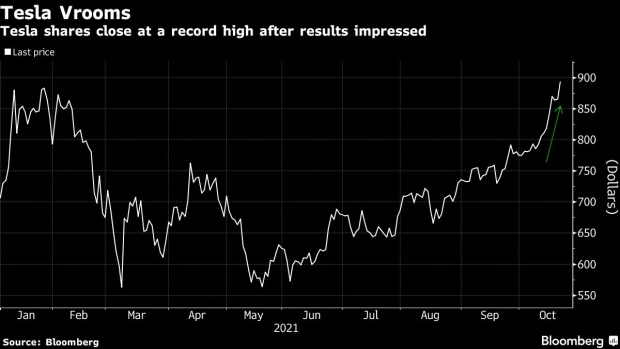 The four-month rally took on new life after the company reported gross margins, a key measure of its profitability, widened by almost 30% in the latest quarter. That sent Tesla’s stock up as much as 3.9% to $899.50 in New York, before closing at a record $894.

Investors had already been piling into the stock ahead of the results after the company reported blockbuster deliveries for the third quarter early this month. The quarter broadly impressed Wall Street analysts, though some wondered if the rally left the shares overvalued.

“The clear highlight of Tesla’s third-quarter beat was a record margin result, with Tesla benefiting from strong volume and favorable mix,” Credit Suisse analyst Dan Levy wrote in a note. That margin strength is a reminder of the “lever Tesla has to eventually reduce prices so as to spur volume higher,” he said.

Profitability was helped by Tesla’s deft navigation of the semiconductor shortage that has crippled many other automakers. However, those stellar margins may not prove sustainable, according to some who follow the company.

“When it comes to margins, it’s true that the third quarter will probably represent the high-water mark -- at least for the next few quarters,” wrote Piper Sandler’s Alexander Potter. Commodity inflation and the opening of new factories would inevitably take a toll, he said. He has the highest price target for Tesla among analysts tracked by Bloomberg, at $1,200.

Tesla makes two of the best selling EVs globally -- the Model 3 and Model Y -- despite a big push from legacy automakers to develop competitors, and the emergence of several new players. As EV adoption continues to grow, with strong support from policymakers, Tesla is expected to be a major beneficiary.

“For 2022, we estimate China will represent 40% plus of global deliveries for Tesla, speaking to how important this region is to the longer-term bull thesis for this story as well as broader EV demand,” Wedbush Securities analyst Daniel Ives wrote in a note.

Still, some said even these strong numbers fail to justify the company’s eye-watering valuation.

JPMorgan Chase & Co. analyst Ryan Brinkman noted that the combined capitalization of Toyota Motor Corp. and Volkswagen AG, the world’s top automakers by sales, is less than half Tesla’s. Brinkman has a 12-month target of $250 on the stock.

His skepticism about Tesla’s market capitalization was echoed by Roth Capital Partners analyst Craig Irwin, who said that the current valuation appeared to rest on the “specious assumption” that the hundreds of EVs slated for launch by 2025 will all be flops. “We acknowledge Tesla is executing impeccably, but this does not alter our view Tesla is egregiously overvalued.”