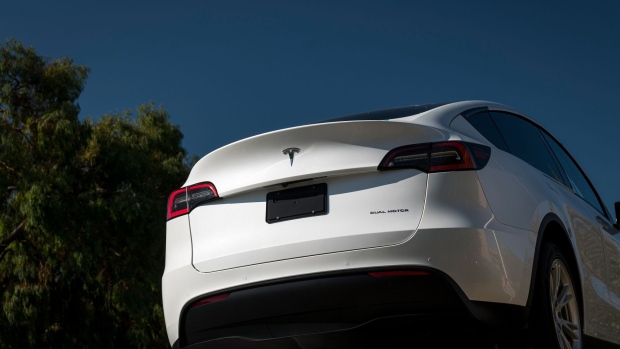 A Tesla Inc. vehicle on a car hauler in Fremont, California, U.S., on Tuesday, Sept. 22, 2020. Tesla will provide a highly anticipated technology update when Elon Musk takes center stage at an event the chief executive officer has dropped hints about for months -- and which has helped propel the company's sky-high valuation. Photographer: David Paul Morris/Bloomberg , Bloomberg

Tesla Inc. is off to a strong start to the new year after the electric-car maker smashed its quarterly record for deliveries in what one analyst called a “trophy-case” performance.

The company’s shares jumped as much as 10 per cent Monday in New York, putting them on track for the best start to a year since Tesla went public more than a decade ago. The EV market leader’s stock soared almost 50 per cent in 2021 to give it a market valuation exceeding US$1 trillion -- one of only a handful of U.S.-based public companies to achieve that status. 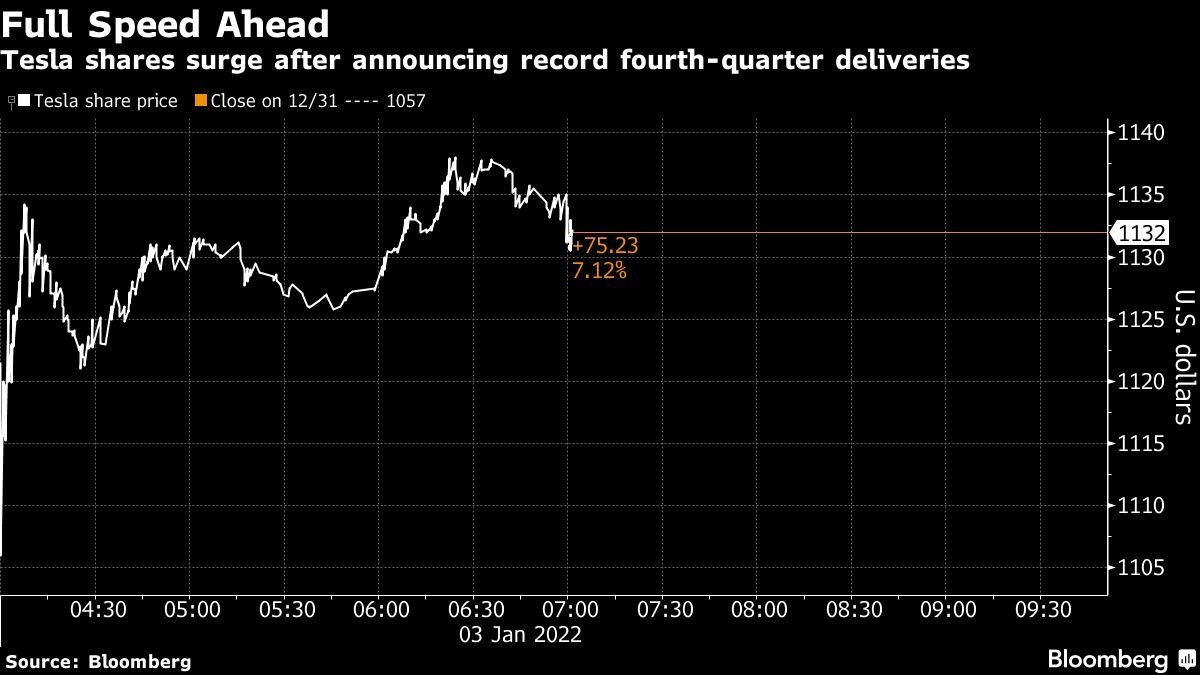 Worldwide deliveries totaled 308,600 vehicles in the fourth quarter, well ahead of the average analyst estimate of roughly 263,000 vehicles, and topping the company’s previous record of 241,300 from the prior quarter. Annual handovers surged to more than 936,000 in 2021, up 87 per cent from the previous year’s level, Austin, Texas-based Tesla said Sunday.

“This is a trophy-case quarter for Tesla as the company blew away even bull-case expectations,” Daniel Ives, an analyst at Wedbush Securities, said in an email. He called it a “jaw-dropper performance” for the end of the year that gives “massive tailwinds” heading into 2022.

The record quarter underscores the “green tidal wave taking hold” for Tesla and Chief Executive Officer Elon Musk, Ives said in a note to clients. The results also point to robust demand in China and Tesla’s skill at navigating the global semiconductor shortage, he said.

Musk, who has pledged delivery growth despite the “supply-chain nightmare” of 2021, praised his crew on Twitter.

Quarterly deliveries are one of the most closely watched indicators for Tesla. They underpin its financial results and are widely seen as a barometer of consumer demand for electric vehicles as a whole because the company has led the charge for battery-powered cars.

Tesla has said repeatedly it expects 50 per cent annual increases in deliveries over a multi-year period. The seventh consecutive quarterly gain comes amid a global semiconductor slump that has crimped production at most other automakers and kept sales in check despite rising demand.

Monday’s jump follows what was a choppy final three months of the year for Tesla investors. A 44 per cent gain in October helped push the company’s market capitalization above the US$1 trillion mark for the first time.

Shares then reached a record high in early November, before plunging after Musk began unloading 10 per cent of his stake. Despite a brief surge at the end of December, the stock finished the year with its first losing month since May.