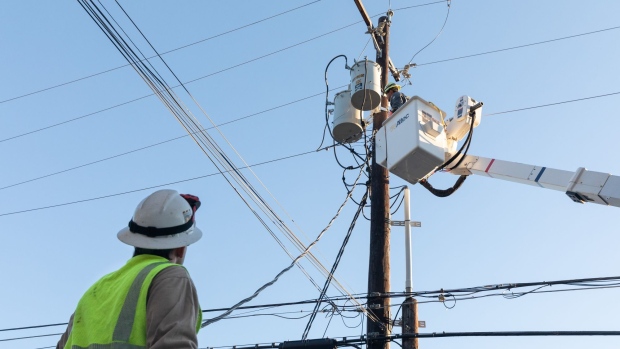 A worker repairs a power line in Austin, Texas, U.S., on Saturday, Feb. 20, 2021. Restaurants in Texas are throwing out expired food, grocery stores are closing early amid stock shortages and residents are struggling to find basic necessities as a cold blast continues to upend supply chains. , Bloomberg

(Bloomberg) -- Texas expects to have enough power supply on hand to meet energy demand this winter -- although officials warn the threat of blackouts remains under the most extreme weather.

The state has about 87,300 megawatts of capacity available in the winter season while demand is forecast to peak at 67,398 megawatts, the Texas grid operator said in a report released Tuesday. One megawatt is enough to power 200 Texas homes.

Still, the Electric Reliability Council of Texas warns that rotating outages may be required in an unlikely scenario of high demand with “extreme” unplanned outages and low wind output.

The Texas grid remains under scrutiny after the system collapsed during a deadly storm in February 2021, leaving much of the state without power for days. Since then, state officials ordered a number of power market reforms including requirements that power-plant owners ensure their generators can operate under extreme cold.

“We are better prepared than ever,” Public Utility Commission Chairman Peter Lake said Tuesday in a press conference about the report. “I expect the lights to stay on.”

Lake and Ercot President Pablo Vegas acknowledged that more work needs to be done to strengthen the grid, noting that population growth is pushing up electricity demand while the amount of generation that can be called on at a moment’s notice hasn’t increased. The state is working on additional reforms to its power market to ensure there is enough reliable power supply, the officials said.

To that end, state regulators proposed a system that would require electricity providers to buy credits from power generators to guarantee they would have enough electricity to meet increased demand during times of grid stress.

(Updates with comment from top utility regulator in fifth paragraph)