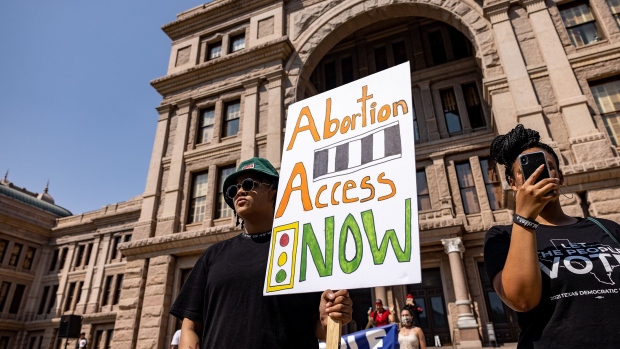 (Bloomberg) -- A federal judge in Texas denied a U.S. Justice Department request to move up a hearing on whether the state’s restrictive new abortion law should be put on hold while the government challenges the ban in a lawsuit.

The Biden administration had argued that an Oct. 1 hearing on its motion for a temporary restraining order against the law should be moved to Sept. 21 because women are already being put at risk. But U.S. District Judge Robert Pitman in Austin denied the request Thursday.

“This case presents complex, important questions of law that merit a full opportunity for the parties to present their positions to the court,” Pitman, an appointee of former President Barack Obama, said in a one-paragraph order.

The law, which took effect Sept. 1, bans most abortions in Texas after six weeks of pregnancy, without exceptions for rape or incest. It also allows members of the public to sue abortion providers suspected of breaking the law and provides for bounties of $10,000 per illegal procedure.

After Pitman scheduled the Oct. 1 hearing, the Justice Department filed a motion to expedite the arguments, saying women in Texas couldn’t wait that long to find out if the law would be put on hold during the litigation.

“Providers in Texas confirmed that many patients have already been forced to travel hundreds and sometimes thousands of miles to obtain an abortion out of state,” the Justice Department said in its request. “This includes a minor who was raped by a family member and had to travel eight hours from Galveston to Oklahoma in order to obtain an abortion.”

Texas lawmakers argue abortions should not be allowed after a fetal heartbeat is detected, while civil rights activist point out that most women do not know there are pregnant until weeks later.