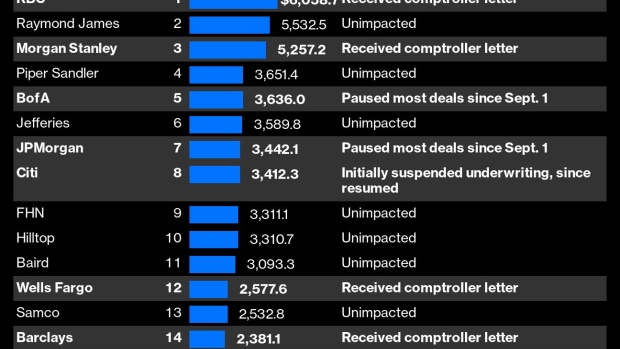 (Bloomberg) -- Political contagion in Texas’ $50-billion-a-year debt market is spreading, and more banks could find themselves ousted by GOP legislation there.

Big Wall Street banks were already shut out of Texas’ municipal bond market, where the state and its cities raise money, for policies deemed unfriendly to the gun industry. Now an even larger group could see their public finance businesses hurt by legislation limiting contracts with firms that “boycott” the energy industry.

Banks like Morgan Stanley and Wells Fargo & Co. are losing out on municipal-bond deals or finding that they’re essentially sidelined from transactions because of the uncertainty surrounding Texas Comptroller Glenn Hegar’s effort to implement the law, which is meant to protect the state’s oil and gas industry against the rise of environmental, social and governance standards.

“The issuer is not sure who they’re going to be able to do business with from start to finish,” said Derrick Mitchell, head of Holland & Knight’s public finance team in Texas.

In March and April, the Republican comptroller sent out more than 150 letters to financial firms, requesting information on their fossil fuel policies. But now issuers have become cautious about working with banks that received letters for fear their sales could be derailed, even if the letter only went to an affiliate of the bank, according to Texas-based bankers and bond lawyers who requested not to be named because they weren’t authorized to speak to reporters.

In his 24-year career in Texas school districts, he’s never had to replace an underwriter before, Pate said. There was a chance that there would be a problem with the deal closing if the school district kept Wells Fargo as the lead manager. “I didn’t want to take that risk,” he said. The laws have “created more challenges for me as an issuer and I’m asking questions that I haven’t had to ask in the past.”

Similarly, a Texas agency removed Morgan Stanley and two other banks from a bond deal this month amid the uncertainty over the law.

The new legislation, known as Senate Bill 13, comes as Republicans across the country have been targeting Wall Street over its increasingly “woke” investing policies that could harm industries such as oil and gas in Texas, which is the nation’s No. 1 producer.

Hegar told Bloomberg News in March that he wants the banks and investment firms to be transparent on their ESG rhetoric and refrain from telling different narratives to different clients across the political spectrum. The law requires that any public contract valued at or over $100,000 have a provision that states the company does not and will not boycott energy companies.

The law is similar to legislation Texas enacted last year that restricts governments from contracting with companies that “discriminate” against the firearms industry. The firearms law has already caused JPMorgan Chase & Co., Bank of America Corp. and Goldman Sachs Group Inc. to stop underwriting most Texas municipal-bond deals.

In response, about three dozen firms including Royal Bank of Canada, Wells Fargo and UBS Group AG have filed standing letters with the Texas Attorney General’s Office saying that they were in compliance with both statutes, according to a list of letters posted on the Municipal Advisory Council of Texas’ website.

But those certifications have been called into question with the comptroller’s inquiry, as explained by a April 27 letter released by the attorney general’s office, which oversees most bond sales. “The comptroller’s request effectively puts the company’s standing letter with this office under review,” Leslie Brock, assistant attorney general and chief of the public finance division, said in the letter.

If a government is under contract with a firm that is under review, there should be a provision in the contract that allows the bank to be replaced if the company make it onto the comptroller’s list, the letter states.

However, it’s difficult, if not impossible, to replace a senior bookrunning manager on a muni bond after it’s priced. As a result, Texas governments have been shying away from using the impacted banks at all and bankers are frustrated they can’t work on deals for the time being, according to people familiar with the matter.

The firms are essentially considered guilty of boycotting the industry until proven otherwise, one person said.

Spokespeople for the comptroller’s office, Barclays Plc, Morgan Stanley, RBC and Wells Fargo declined to comment. A spokesperson for UBS didn’t immediately respond to a request for comment.

The first round of the comptroller’s probe went out in March, followed by a second round of inquiries on April 11  -– meaning that the last of the responses are due back by June 10 and the comptroller will then decide what firms it considers to be boycotting energy, although most have contended they do not.

The list may mean municipalities will be forced to work with fewer banks, which could increase borrowing costs on top of soaring bond yields amid a broader selloff, people familiar say.

The fallout comes during a busy period in the market. Texas issuers just passed $23.8 billion of new debt sales on May 7, and they are now looking to begin to sell those deals.

While some issuers could accelerate closing dates of transactions to before June 10 to take some of the risk off the table, the window to do so is closing because of the time it takes to sell bonds and get the attorney general’s approval on a transaction, one person said.

Some deals have already had banks removed in anticipation of the comptroller’s list.

The Texas Department of Housing and Community Affairs removed Barclays, Morgan Stanley and RBC from its $190 million bond deal in May, Kristina Tirloni, a spokesperson for the agency, confirmed in an emailed statement.

“Provided the firms respond affirmatively to the comptroller and are not added to any restricted list, they may be included in future transactions,” she said.

Read more: Law That Shut Goldman, JPMorgan Out of Texas Munis Is Spreading