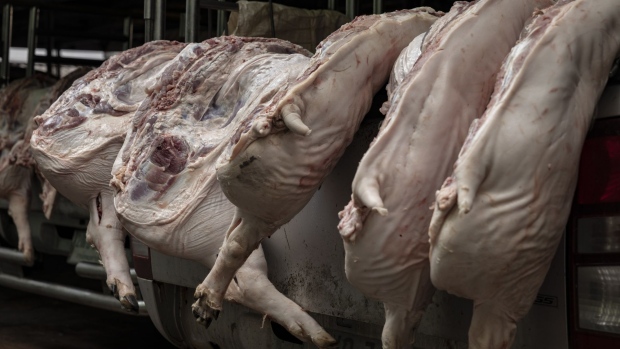 Pig carcasses in trucks at a wholesale distribution center in Bangkok, Thailand, on Friday, Jan. 7, 2022. Thailand imposed a ban on pork exports from Jan. 6 to April 5, as prices in the major producer soar amid a shortage of the meat. Photographer: Andre Malerba/Bloomberg , Bloomberg

(Bloomberg) -- Authorities in Thailand are cracking down on the hoarding of frozen pork meat amid shortages that have helped trigger the doubling of prices.

Over the past week, Thai police have raided two cold-storage facilities, in Songkhla and Chanthaburi provinces, each holding more than 200,000 kilograms of pork, the government said. Another warehouse near Bangkok was also found to be hoarding more than 5,000 kilogram of meat.

The crackdown comes as the government tries to cool rising prices on key staples such as pork and poultry, and as opposition parties put pressure on Prime Minister Prayuth Chan-Ocha by bringing a censure motion against him, claiming that he has failed to tackle the pandemic, high inflation and other economic issues.

Earlier this month, Thailand reported its first case of pig-killing African swine fever, which threatens to reduce the number of pigs further if the spread can’t be contained.

The number of Thai hogs has already dwindled over the past year due to Covid restrictions on dining and travel, increased measures to prevent the spread the African fever and rising feed prices.