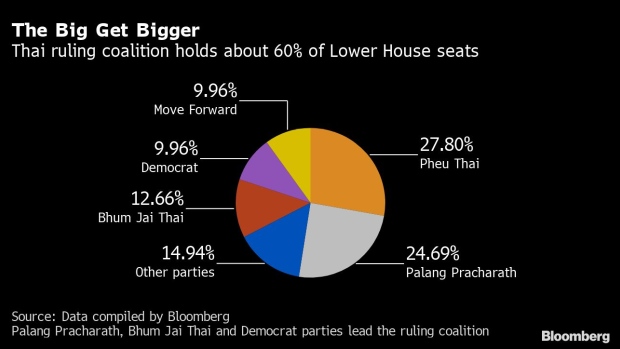 Prayuth Chan-Ocha, Thailand's prime minister, center, wears a protective mask at the Government House of Thailand in Bangkok, Thailand, on Wednesday, Dec. 2, 2020. Thailand's Constitutional Court is set to decide whether Prayuth should be disqualified for breaking ethical rules, a move that would see him ousted even after he's repeatedly rejected calls by pro-democracy groups to resign. , Bloomberg

Most major parties in parliament backed a set of constitutional amendments that include increasing the number of constituency representatives to 400 from 350 and bringing back an earlier system of casting two ballots -- one for a candidate and another for a political party.

At a joint session of the parliament on Friday, 472 lawmakers voted for the amendments, while 187 abstained and 33 voted against, according to a televised broadcast of the proceedings. The changes will now need an endorsement from King Maha Vajiralongkorn.

The changes are the latest attempts by Thailand’s royal establishment to fine-tune election rules already heavily stacked in favor of the military and its allies, which won a vote two years ago following a lengthy process to write a constitution in the wake of a 2014 coup. The amendments are among a number of signs pointing to another election before the government’s four-year term ends in early 2023.

The amendments fall well short of the charter overhaul demanded by pro-democracy protesters, who have revived street demonstrations in recent months expressing anger over Prayuth’s handling of the pandemic and the economic fallout. Since the start of September, protesters have staged daily gatherings to push for reform of the monarchy and the resignation of Prayuth, who survived a non-confidence vote last week.

“These changes will boost dominance of large political parties in the next election and cement the course for the key ruling party to return as the government,” said Punchada Sirivunnabood, a visiting fellow at Singapore’s ISEAS-Yusof Ishak Institute, who researches Thai politics.

While the change would benefit all major parties, including the main opposition Pheu Thai, the key beneficiary is expected to be the ruling Palang Pracharath backed by the military. That’s because the constitution also gives 250 senators who were appointed by the military a vote for prime minister, making it much more difficult for pro-democracy parties to form a government.

Supporters of the electoral proposals argue that by increasing the number of constituencies, each district gets redrawn to a smaller one that allows representatives to work more closely with ordinary citizens. The two-ballot proposal would let voters choose different candidates and parties, encouraging more public scrutiny of their policy platforms.

Critics in the legislature disagree, saying the change will spur more vote buying and make it far more difficult for smaller parties to win.

“If we were to amend the constitution for the benefit of the people, we must use larger districts to make it more difficult to buy votes,” said Senator Seree Suwanpanont.

The Senate’s ability to vote for the prime minister means that a former general is still likely to be running the country after the next election. That could either be Prayuth or any candidates favored by the establishment-backed Palang Pracharath, such as former army chief Apirat Kongsompong.

Still, discord in the ruling party could end up bolstering the opposition Pheu Thai, which is stacked with allies of exiled former Prime Minister Thaksin Shinawatra. On Thursday, Thammanat Prompao -- a former ally of Thaksin who aligned with the military after the 2014 coup -- was removed from the cabinet. The former deputy agriculture minister, who helms a sizable faction of lawmakers, said he and Prayuth have political differences and planned to “build a new house.”

Thailand currently uses a modified version of the mixed-member proportional representation, which is practiced in Germany and New Zealand. That means lawmakers in 500-member Lower House consist of those who are directly elected by voters and those who are put forward by parties based on how well each party performs in the nationwide polls.

The move to reduce the number of party-list lawmakers to 100 from 150 will make it harder for smaller parties to cross the threshold needed to win these seats.

The maneuvering in parliament risks further inflaming an anti-government protest movement that has gained momentum in recent weeks, with clashes between demonstrators and security forces and more charges leveled against key demonstration leaders. The rising political tensions could hurt the government’s efforts to reopen Bangkok and key provinces to foreign tourists this year.

“The government can afford to ignore the changes demanded by the protesters because they still have everything under control even after more than a year of protests,” said Titipol Phakdeewanich, dean of the political science faculty at Ubon Ratchathani University in northeastern Thailand. “They can make these moves for political gain as long as the power structure and the conservative forces that put them in power remains the same.”