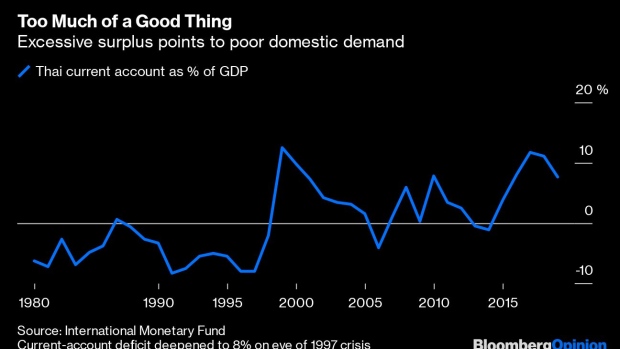 (Bloomberg Opinion) -- Thailand really should let its hair down. The currency is strong and the current-account surplus is big versus the neighborhood, while there's a lot of scope for fiscal expansion. The Bank of Thailand has been grudging in cutting interest rates, in contrast to the easing party under way not just in Asia but in emerging and developed markets the world over.

On one level, the sobriety is admirable. Thailand was the first domino to fall in the Asian financial crisis of 1997-98; the baht's collapse and Bangkok's flimsy economic management will forever be associated with one of the most wrenching periods in Asia's postwar history. But Thailand may have learned the lessons too well. Its policy settings look like they are primed for truly dire times –  few predict a coming catastrophe – and insufficiently calibrated to prolong growth or mitigate a shallow recession.

Even the International Monetary Fund, which bailed out Thailand in the crisis, says Bangkok can loosen up a bit. The IMF's annual review of the economy this week praised the central bank’s quarter-point cut in the benchmark rate to 1.5%, a shock when it was executed in August. At least some IMF directors saw room for further reductions. The fund also wants more budget activism and appears to push back against hoarding reserves and the hefty current-account surplus. “Many directors considered that Thailand's external position remains substantially stronger than warranted by medium-term fundamentals and desirable policies,'' the report said.

You could be forgiven for thinking the IMF wants a weaker exchange rate. The baht is up about 7% against the dollar this year, the most among emerging markets. Asia’s next best, Indonesia's rupiah, advanced little more than 1%. The baht's resilience is generally attributed to the high current account and monetary restraint, as I wrote here, the very things the IMF says ought to be tackled.

Two decades ago, a perky currency would have been a great problem to have. Today, the baht's strength masks an array of problems, some of them distinctly first world in nature. Inflation is virtually non-existent; consumer prices rose just 0.3% from a year earlier in September. Productivity is low and wages are high for the region. Thailand’s aging population means it resembles Japan and South Korea more than Malaysia, the Philippines or Indonesia. Unemployment is low, in part because the labor force is shrinking.

Thailand’s politics are also looking old. The military has staged two takeovers since 2006 in the ongoing feud against the populist former prime minister, Thaksin Shinawatra, and his partisans. A long-delayed election in March that extended coup leader Prayuth Chan-Ocha’s tenure as prime minister is a throwback to the era of military-dominated politics that South Korea, Taiwan, Indonesia and the Philippines learned to leave behind.

Southeast Asia's overall growth is likely to suffer from the U.S.-China trade war, though individual countries may receive more investment as supply chains are reconfigured. Thailand may get some of that. But as the IMF notes, some firms are seeking to relocate from Thailand to cheaper locations like Cambodia, Laos, Vietnam and Myanmar.

Put it all together and Thailand looks like an economy in need of caffeine. Bangkok should use this moment to deploy public investment and take interest rates closer to zero; the country already looks more like a developed economy in some respects than a developing one. So it might as well have a monetary and fiscal profile to match.

Minutes from the Bank of Thailand's September meeting released Wednesday made some encouraging noises. Further baht gains may hurt activity, they said. Under consideration is relaxing capital outflow rules to nudge Thais to invest more overseas along with “efforts to stimulate investment to reduce the elevated current-account surplus.''

A repeat of 1997 or the 2007 global crisis is unlikely, so Thai officials can chill on the restraint and ponder a profound question: Is the country first world or third; or, perhaps, where does it land on the scale between them?

While they figure that out, let's have some stimulus.