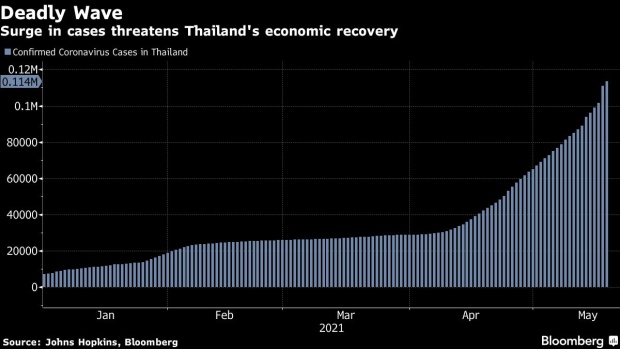 Pedestrians walk along Silom road in Bangkok, Thailand, on Thursday, May 13, 2021. Thailand plans to inoculate the majority of the adult population in Bangkok in the coming months to quell a flareup in virus infections that's made the capital city the epicenter of the nations biggest Covid-19 outbreak. Photographer: Nicholas Axelrod/Bloomberg , Bloomberg

A meeting of the cabinet chaired by Prime Minister Prayuth Chan-Ocha on Tuesday approved the new borrowing plan from the finance ministry, the people said, declining to be identified before a public announcement.

The fresh borrowing can be completed before Sept. 30 next year, and is on top of an ongoing 1-trillion baht debt plan authorized by the cabinet last year to fund pandemic relief measures, they said.

Thailand’s public debt-to-gross domestic product ratio may rise to 58.6% by September with the additional borrowing, but would still be below the nation’s 60% debt ceiling, the people said. The government will need to issue an emergency law that needs to be endorsed by the king before the public debt management office can begin raising fresh debt, they said.

Thailand, which is grappling with the deadliest Covid wave to hit the nation so far, slashed its growth outlook for this year earlier this week, citing the delay in reopening borders to foreign tourists and slow vaccination.

The country’s budget deficit soared almost 17% in the first half of the fiscal year that began in October as revenue tumbled, prompting the government to almost triple borrowing to meet the shortfall.