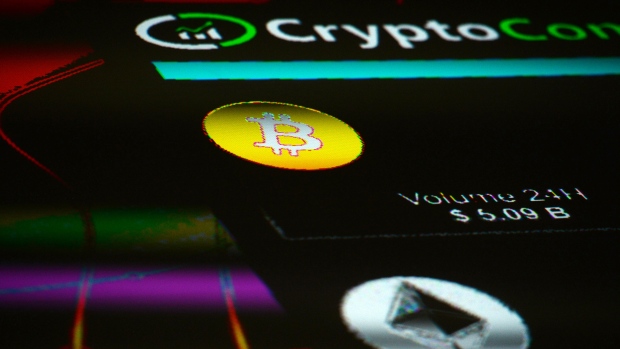 The symbols for bitcoin and ethereum cryptocurrency sit displayed on a screen during the Crypto Investor Show in London, U.K., on Saturday, March 10, 2018. , Mary Turner/Bloomberg

It might be hard to believe. But after the 1,400 per cent rally of 2017, with wild swings along the way, the great crypto craze has cooled, at least for now. For the past month, bitcoin’s price has stalled between US$8,000 and US$11,300 -- a minuscule range by its standards. And internet searches for “Bitcoin” have plunged, suggesting public interest has, too.

“The general public is now realizing that this is not a risk-free, get-rich-quick, investment opportunity and general interest has since diminished,” said Lucas Nuzzi, a senior analyst at Digital Asset Research.

The 2018 lull shows just how quickly investment fads can come and go. Gone for now are the days when bitcoin dominated talk at holiday tables. Stories lately look a lot like the ones in the back sections of financial papers -- dry accounts of regulatory scrutiny, market structure and legal wrangling.

Online searches for “bitcoin” fell 82 per cent from December highs, according to Google Trends. Tweets that mention the coin peaked Dec. 7, at 155,600, and are now down to about 63,000, BitInfoCharts says. And the number of bitcoin transactions is off 60 per cent from its record on Dec. 13, according to Blockchain.info.

December brought “Bitcoin Craze Propels Coinbase App to No. 1 in Apple’s Store.” Now there’s “Bitcoin’s Wildest Days Are Over as Regulators Circle.” Indeed, Bitcoin’s been in the news for all the wrong reasons lately.

Its price slumped Wednesday after Google said it would prohibit cryptocurrency ads, following Facebook’s move from January. Major banks including JPMorgan and Bank of America banned crypto purchases on their credit cards, the Securities and Exchange Commission has stepped up cryptocurrency oversight and Congress is holding hearings on how to treat the digital coins. Earlier this month, Allianz Global Investors argued the the coin’s “intrinsic value must be zero.”

“The story with bitcoin is pretty straightforward,” said Roger Kay, president of research firm Endpoint Technologies Associates Inc. “It went up fast, and then came down even faster. Consumers who flocked to it late got burned. They are in the shadows now, licking their wounds. And others contemplating how to get rich quick are acutely aware that what goes up can come down, and maybe bitcoin isn’t the way to go about it.”

Of course, bitcoin’s obituary has been written countless times in its nine-year existence. In fact, 111 such stories appeared last year when it was on a tear, according to 99bitcoins.com. Almost forty have been written so far in 2018, on track to top that level.

Still, just Wednesday, people familiar with the matter said hedge fund billionaire Alan Howard made sizable personal investments in cryptocurrencies last year. And even Allianz doesn’t think bitcoin is done for, not as long as the number of speculators and crypto true believers remains high. Coinbase says it still has more than 20 million customers, though it’s not clear how many have been active recently.

And this isn’t bitcoin’s first slump. It’s had at least three declines of 70 per cent or more since 2010 only to come back with a vengeance and reach higher highs.

For now, though, boring might be the new normal as the decline in public interest could leave bitcoin in what for it could be considered a tight range. Remember, after a rally boosted its price 84-fold in 2013, it tumbled back down in the next week and held there until lifting off again in 2017.