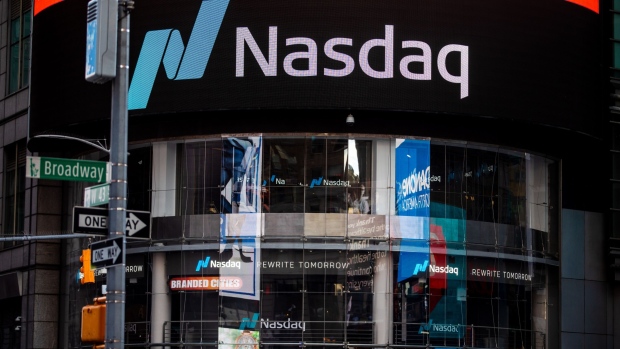 Signage is displayed outside the Nasdaq Market Site in the Times Square area of New York, U.S., on Tuesday, May 12, 2020. , Demetrius Freeman/Bloomberg

The FAANGs are slumping in pre-market trading and futures are pointing to a sharp drop for the Nasdaq as selling pressure that brought down the technology sector last week continues unabated. Tesla is standing out as a story stock for all the wrong reasons, with shares down more than 10 per cent pre-market after the vehicle maker was spurned by the S&P 500’s gatekeepers, who refused to grant TSLA entry to the prestigious index Friday afternoon (preferring instead to invite Etsy, Teradyne and Coty).

Louis Audet has essentially told his telecom company’s unsolicited suitors to take a hike. “Our shares are not for sale. And let me be clear, our refusal is not a negotiating position, it is definitive,” he said in a release yesterday afternoon, a couple days after the $10.3-billion takeover approach was initially rejected by Cogeco’s boards and the controlling Audet family. A spokesperson for Altice USA pointed us to the company’s Sept. 3 statement about standing by its offer. We’ll continue chasing perspective from minority Cogeco shareholders.

The chief executives of nine leading drugmakers at the forefront of the global race to develop a COVID-19 vaccine have banded together today in a pledge to not act in haste as the public – and the U.S. president – eagerly await a successful vaccine. In a statement that vows to act in accordance with “sound scientific principles”, the CEOs say they will “only submit for approval or emergency use authorization after demonstrating safety and efficacy through a Phase 3 clinical study that is designed and conducted to meet requirements of expert regulatory authorities such as FDA.”

Prominent Canadian tech investor John Ruffolo is paralyzed from the waist down after a serious cycling accident last week. His wife describes him as “alert, communicating and fully aware” of the situation. And in a LinkedIn post, John said he “will be back in full force as soon as humanly possible.” Jon Erlichman has been in touch with the team that Ruffolo partnered with to launch a new private equity fund; we’re looking forward to hearing directly from one of those partners shortly after 9 a.m. ET.

Aurora Cannabis has cleared the way for its new CEO with a whole lot of news today. The cannabis producer warned on fiscal fourth quarter revenue, said it will take up to $1.8 billion in goodwill impairments, announced its partnership with UFC has been terminated, revealed amended covenant agreements with its lenders, and pushed out its target for being profitable (on an adjusted EBITDA basis) to the second quarter of fiscal 2021. All that as it promotes CCO Miguel Martin to the role of CEO.

-Suncor Energy has cut its full-year production forecast to a range of 680,000-710,000 from the previous outlook for as much as 780,000 barrels of oil equivalent per day. The revision is partly due to an accelerated maintenance schedule at Suncor's Firebag operations.

-Great-West Lifeco announced this morning the acquisition of MassMutual’s retirement services in a move that widens the financial conglomerate’s footprint in the United States. All in, the deal’s price tag is $4.4 billion.

-Artis Real Estate Investment Trust this morning announced it will spin off its Canadian retail properties. It also said it’s expanding planned asset divestments by $550 million. Proceeds will go toward paying down debt.

-Obsidian Energy says it is formally launching its offer to buy Bonterra Energy at the previously-stated proposed exchange ratio of two OBE shares per BNE share.

-Walt Disney Co. shares are inching higher this morning as investors take stock of the opening weekend for Mulan on Disney+. Our Bloomberg partners are pointing to data from Sensor Tower Inc., which shows downloads of the streaming app surged 68 per cent over the weekend.