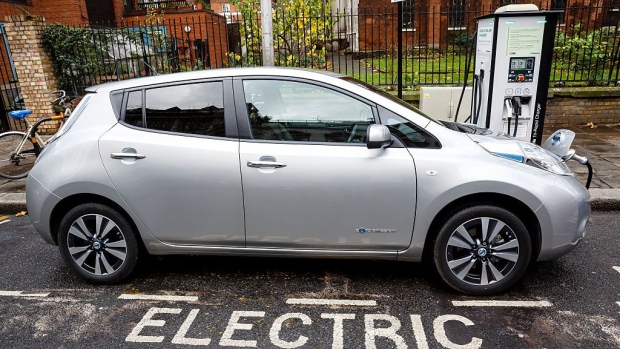 An employee assembles an electric engine inside the Audi AG production plant in Gyor, Hungary, on Monday, June 7, 2021. Amid tougher emissions rules and fines for violating them, sales of EVs -- both battery-electric and plug-in hybrid models -- in Europe more than doubled last year to about 1.3 million units, topping China for the first time. , Bloomberg

(Bloomberg) -- Stay on top of the electric car revolution by signing up to our Hyperdrive newsletter here.

The late Fiat-Chrysler Chief Executive Officer Sergio Marchionne went so far as to implore drivers not to buy his company’s seminal electric Fiat; the unit economics were so poor, he reasoned, that he lost money on every sale ($14,000 by Marchionne’s math).

Well, people are buying electric vehicles now, partly because the climate is simmering closer to a boil and partly because the auto industry is finally making appealing battery-powered machines in volume. Ultimately, the whither and why is less important than the what.

Drivers around the world will buy about 5.6 million electric passenger vehicles this year, according to a new report from BloombergNEF released in concert with the COP26 United Nations Climate Change Conference. That’s almost double the number purchased last year and, more importantly, it represents almost 8% of all vehicle sales.“We are seeing some more organic demand for EVs,” Aleksandra O’Donovan, one of the BNEF analysts who authored the report, commented via email. Among the factors affecting this rise: “One, the wider choice of electric vehicles now available to customers, and even more importantly, vehicles addressing those sought after segments like the SUVs,” O’Donovan said.

Also, EV sales are 20% or more of total vehicle sales for several European automakers, including Volvo and Daimler. And there are more than 500 models of EVs and fuel cell vehicles available for sale today — just six years ago, that figure was under 100.

Charging often has been cited as the reason why adoption wasn’t happening more quickly. But the narrative around the dearth of public charging infrastructure creating a bottleneck to EV adoption also is set to change, as consumers more and more are taking matters into their own hands. Garages and parking lots will see some 2.1 million vehicle chargers installed this year, according to the BNEF report, a 63% increase over the number of private plugs at the start of the year.

BNEF’s O’Donovan’s cautions there still is work to be done to get road transport on a path to a net-zero fleet by 2050. “Sales of combustion vehicles need to essentially stop around 2035,” she said. “Automakers accounting for only 19% of the global passenger vehicle market have stated their intentions to stop selling ICE vehicles by then.”

Indeed, it will be years before electric vehicles outsell their gas-powered siblings. But change, as they say, happens very slowly and then all at once. And it’s no longer happening slowly.