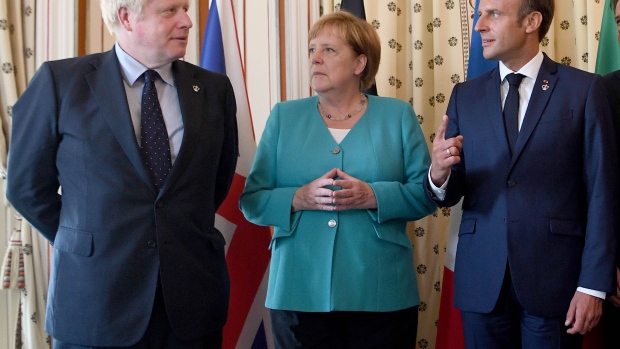 BIARRITZ, FRANCE - AUGUST 24: (L-R) British Prime Minister Boris Johnson, German Chancellor Angela Merkel and French President Emmanuel Macron pose during a G7 coordination meeting with the Group of Seven European members at the Hotel du Palais on August 24, 2019 in Biarritz, France. The French southwestern seaside resort of Biarritz is hosting the 45th G7 summit from August 24 to 26. High on the agenda will be the climate emergency, the US-China trade war, Britain's departure from the EU, and emergency talks on the Amazon wildfire crisis. (Photo by Andrew Parsons - Pool/Getty Images) , Photographer: Pool/Getty Images Europe

(Bloomberg Opinion) -- Like so many Brexit moments that are telegraphed as decisive, Boris Johnson’s Oct. 15 deadline for a trade deal came and went. That the two sides are still talking points to the core fact of this negotiation: It’s in both of their interests to find agreement.

That doesn’t mean a trade deal is guaranteed. As with negotiations during Theresa May’s time as U.K. prime minister — which produced a Withdrawal Agreement that British lawmakers found too humiliating to swallow — the danger for the European Union is that it plays its hand too well. If Boris Johnson finds the political cost of accepting Europe’s terms outweighs the economic cost of rejection, he’ll be left with no choice.

Pulling the plug on the talks and accepting “no deal” wouldn’t be a hard sell in Britain. Johnson’s parliamentary backbenches are filled, quite deliberately, with committed Brexiters, many of whom have counselled exactly that option. Johnson could also use a positive distraction for the virus-hit north of England, a Brexit stronghold that got him elected in December but where lockdown restrictions have created tension with his government. He might relish a chance to remind them of the good old days.

Walking away would also let Johnson put the blame for Brexit’s high economic price onto the EU. Even with a trade deal, there will be disruption and new costs for which many Britons are unprepared. By striking a deal, Johnson will own those costs too.

And yet, Downing Street knows the lasting damage that no deal would inflict on the U.K. Any nationalistic buzz would be fleeting. On Friday, Johnson said it was time to prepare for leaving without a deal — which might sound to the unversed ear like, “We’re outta here.” But the door remains open. Negotiations are expected to continue next week, with the next EU-set deadline at the end of October. Johnson the classicist may be inclined toward Pericles’s “daring and deliberation;” Johnson the Churchill biographer understands well that “talk, talk” keeps options open.

While the scope of the deal that can now be reached is narrow compared to what was originally envisaged, the difference between no deal and a small deal is like the distance between zero and one. First there are the economic costs, piled on top of the expense of managing Covid. Dan Hanson of Bloomberg Economics estimates the near-term shock as about 1.5% of yearly gross domestic product.

Worse is where those costs will be borne. Not having a trade deal would, for example, mean significant tariffs for the carmaking sector in the Midlands. This area has been hit hard by the pandemic and Johnson’s tougher lockdown restrictions. This wouldn’t be a great time to tell people there that they might lose their jobs, as well as have to pay more for imported food and goods.

Johnson could claim, in pulling the plug, that he’d stood up for Britain’s small (0.12% of the economy) and symbolic fishing industry. But 80% of the country’s fishing catch is exported, much of it to the EU. Already fishermen in coastal communities face expensive post-Brexit frictions in the form of various health and origin certifications.

There are other ways that leaving without a deal would hurt. The shock of ending a near 50-year close trading partnership in that fashion would create serious uncertainty for companies and dent consumer confidence. A skinny trade deal at least provides a floor for further talks and sets a tone of cooperation instead of acrimony.

As odious as it would seem to the EU, it would be far better to give Johnson a reason to say “yes.” This doesn’t mean selling out French fisherman, or accepting that the U.K. will have no constraints on state subsidies. There is room for maneuver on all the areas of contention, and indeed negotiators seem to be getting closer on state aid. But the key word is compromise.

The EU holds most of the cards; access to U.K. waters being the notable exception. But “no deal” would inflict damage on both sides — even if unequally. If that happens, the two parties will have to start over at some future point, and the EU will have to accept its share of the blame.