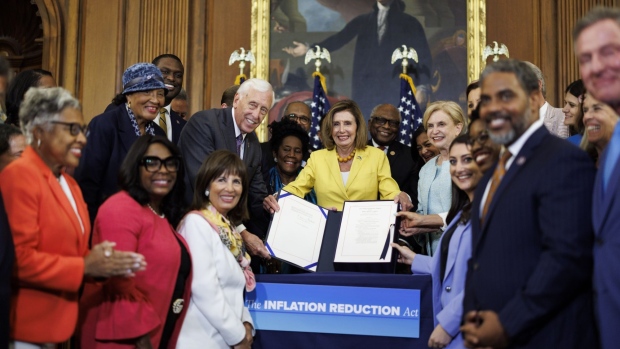 House Speaker Nancy Pelosi holds the bill H.R. 5376, the Inflation Reduction Act of 2022, after signing it at the US Capitol on August 12. , Bloomberg

(Bloomberg) -- Anyone would be forgiven for asking why a soon-to-be law called the “Inflation Reduction Act” is being heralded (and cursed) as the most significant US climate legislation ever. Yes, the bill is expected to reduce the deficit and enables Medicare to negotiate drug prices, which could lower their costs. But shouldn’t something with that name have more to do with price controls and less with solar panels?

“It does seem kind of wacky and counterintuitive for the most consequential climate legislation ever to be called the ‘Inflation Reduction Act,’” says Angela Bradbery, a professor of public interest communications at the University of Florida’s journalism school. “For the public, it’s probably more confusing than anything.”

Congress once passed bills with simpler and more intuitive names, such as the Clean Air Act. But today’s political and media landscape demands that legislation be packaged to steer public debate in a direction the sponsors can better manage. In choosing a name — even a tortured acronym like 2001’s USA PATRIOT Act (for “Uniting and Strengthening America by Providing Appropriate Tools Required to Intercept and Obstruct Terrorism”) — politicians try to “brand the proposal, and get this one concept to be the concept that people associate with legislation,” Bradbery says.

Since inflation is a pressing worry for many Americans, it’s not surprising that the word won out. Democrats want to persuade voters they’re working to tame inflation as the midterm elections approach.

“Words matter. Names matter,” says Ed Maibach, director of George Mason University’s Center for Climate Change Communication. “Inflation and the price of gas are top of mind concerns for most Americans today, so calling the bill the Inflation Reduction Act was a stroke of rhetorical genius.”

Senator Joe Manchin, a key framer of the IRA, repeatedly told colleagues that inflation needed to be their top priority and that he would accept nothing in the bill that would inflame it. In a statement announcing the bill, the Democrat from deep-red West Virginia described it as “paying down our national debt, lowering energy costs and lowering healthcare costs,” and didn’t use the word “climate” until well into the fourth paragraph. On CNN’s State of the Union, Manchin touted the legislation as “not a green deal” but a “red, white and blue deal.”

The history of failed US climate bills shows an evolution in naming. A major early push — the Climate Stewardship Act of 2003 — became the Climate Stewardship and Innovation Act when it was reintroduced two years later. By 2009, the bill sometimes referred to as Waxman-Markey, the American Clean Energy and Security Act, kept “climate” out of its title.

That change reflected something pollsters know well: Americans support clean energy more than they worry about climate change. A majority of Americans now wants the government to take more action on climate. But the public still places a higher priority on other issues, especially the economy.

“Focusing on health and jobs is a more powerful rhetorical technique than [highlighting] climate,” says Leah Stokes, a longtime climate advocate and a political scientist at the University of California at Santa Barbara. “But that may be changing.”

Brian Christopher Jones, a legal scholar at the University of Sheffield in the UK, has studied naming conventions in legislatures around the world. Names of bills in the US Congress sometimes have so little to do with the contents that he’s suggested a naming authority to review them. Bill names not only have political ramifications but can influence court decisions, he says. Many lawmakers outside the US “are unwilling to let bills with inaccurate titles move forward,” Jones says.

Since the IRA’s surprise unveiling on July 27, analysts have debated how much its contents pertain to inflation. “The IRA speaks to the high energy costs” Americans are struggling with, says Stokes. A recent analysis she co-authored found that 41% of inflation is attributable to fossil fuel prices. Aliya Haq, vice president of US policy and advocacy at Breakthrough Energy, says the bill is “deflationary, because it increases our energy supply and makes it easier for consumers to afford their energy bills.”

The Congressional Budget Office, the Committee for a Responsible Federal Budget and the Penn Wharton Budget Model all found that the legislation will have a negligible effect on inflation.

However much it influences voters come November, it’s not clear that the name “Inflation Reduction Act” mattered to the bill’s passage, says Susan Joy Hassol, director of the nonprofit Climate Communication. The IRA garnered a similar level of support as its predecessor, the Build Back Better Act. Democrats were for it and Republicans were solidly against it, “and that was true with the prior name and didn’t change,” she notes.