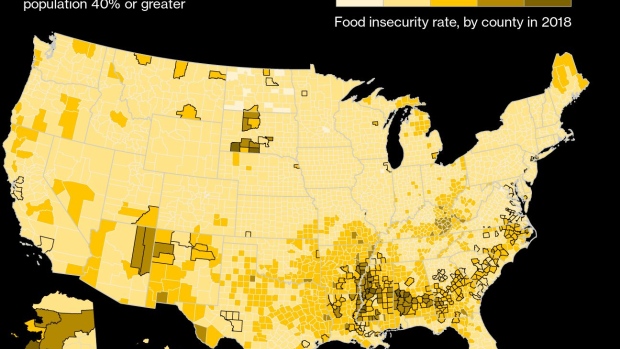 People wearing protective masks wait in line outside a Catholic Charities Brooklyn and Queens pop-up food pantry in the Brooklyn borough of New York, U.S., on Friday, May 29, 2020. The pandemic has put tremendous strain on the city’s food banks and pantries, as demand for food grows and the volunteer-driven organizations lack resources and staff. , Bloomberg

(Bloomberg) -- Access to food has been unequal in America long before the onset of the coronavirus. But the pandemic has deepened the problem, with images of snaking lines at food banks bringing the harsh reality to light.

Even in the U.S., one of the most food-secure nations in the world, millions face difficulty in accessing nutritious meals. Food inequality disproportionately impacts Americans of color, who’ve already been among the hardest hit by Covid-19 and its economic fallout.

Roughly 17 million more people will become food insecure in 2020, bringing the total to 54 million, including 18 million children, according to projections from Feeding America, the country’s largest hunger-relief nonprofit organization.

Disparities along racial lines could worsen. Already, Black Americans are two-and-a half times as likely as White Americans to have low or very low access to enough food for an active and healthy life. For Latino Americans, the rate is double that of White people. The figures highlight some of the underlying systemic inequalities that exist over racial lines as nationwide demonstrations draw hundreds of thousands to protest police brutality and the killing of George Floyd.

“It’s not new, even though with Covid-19 we’ve seen an increase in food insecurity overall, and it seems like people of color again are disproportionately impacted,” said Angela Odoms-Young, associate professor in the department of kinesiology and nutrition at the University of Illinois at Chicago. For those living at the “fringe,” just above the poverty line, changing conditions can easily push them below the threshold and “into food insecurity,” she said.

People living below the poverty line are six times as likely to be food insecure as those at nearly double the level, according to data from the U.S. Department of Agriculture. That gap could widen this year, as it did during the 2008 downturn. It took nearly 10 years for America to recover from the food-security hole it fell into during the Great Recession.

Food insecurity describes a household’s inability to provide enough food for healthy living. That could mean both having insufficient supplies, but also a lack of the variety of foods, including fresh fruits and vegetables, that are needed to provide the right nutritional balance.

So-called food deserts, or areas without such suppliers as grocery stores, are common in low-income areas. In these zones, people’s nutritional options are often limited to cheaper, high-calorie and less nutritious food.

Black Americans are twice as likely as their White counterparts to live below the poverty line, and without as much of a wealth and savings safety net, can become food insecure more quickly.

Eight of the 10 counties with the highest food-insecurity rates are more than 60% Black, according to Feeding America. Those eight are located in the deep South.

“It really is not surprising when you consider the drivers of food insecurity: Income, employment,” said Odoms-Young. “It’s also an accumulation of disadvantage that happens. I don’t think people always recognize that accumulation -- how disadvantages can accumulate over generations and cause those disparities in wealth.”

Food accessibility goes hand-in-hand with food expenses in the fight against hunger. Of the 50 counties with the biggest gap between the cost of meals and individuals’ ability to pay for them, 46 have a Black or Latino population that surpasses national figures, according to Feeding America’s Map the Meal Gap 2020 report.

With millions thrown out of work since mid-March -- filings for U.S. unemployment benefits have topped 1 million for 13 straight weeks -- budget shortfalls will almost certainly worsen.

Black and Latino Americans are enrolled in the government’s Supplemental Nutrition Assistance Program at a rate that is higher than their portion of the overall population. SNAP, the USDA’s anti-hunger program commonly known as food stamps, serves more than 35 million people.

The $2 trillion federal Covid-19 relief package included about $16 billion in additional 2020 funding for SNAP, and the USDA says it’s providing a 40% increase in benefits to ensure that low-income individuals have enough food. But millions who would be eligible for relief don’t get benefits because of the hurdles required to register, which can include multiple office visits, fingerprinting and, for those with needs for only part of the year, difficulties in proving seasonal income fluctuations. Those obstacles, too, often are more acute for people of color.

Covid-19 has disproportionately affected minority populations, killing Black Americans at more than twice the rate that of White Americans. And many areas that have seen high virus infections also suffer from food insecurity, which can contribute to longer-term health problems.

The coronavirus pandemic is expected to continue growing the amount of people who are food insecure. Rates of insecurity doubled in the U.S. in April and tripled for families with children, who in many cases have lost free and reduced-cost school meals with the pandemic shutdown, according to a Northwestern University report. Feeding America projects one in six adults and a quarter of all children may experience food insecurity this year.