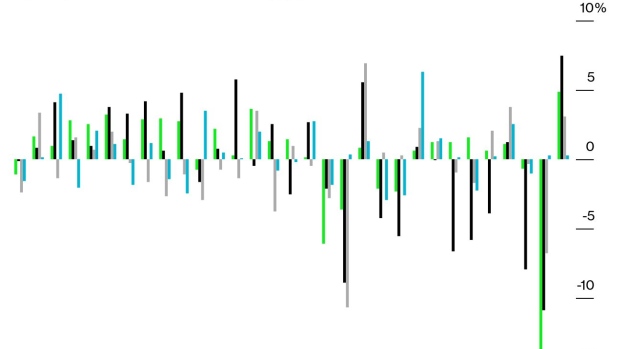 Emissions rise from the coal fired Santee Cooper Cross Generating Station power plant in Pineville, South Carolina, U.S., on Thursday, March 22, 2018. Construction of new coal plants around the world fell for the second year in a row in 2017 as the world's biggest polluters began to restrict new projects and explore other technologies. Photographer: Luke Sharrett/Bloomberg , Bloomberg

(Bloomberg) -- Sign up to receive the Green Daily newsletter in your inbox every weekday.

U.S. greenhouse gas emissions have been trending downwards for the past 12 years, thanks to a power sector transforming through more gas, less coal, more renewable generation, and greater efficiency. Prior to this year—i.e., prior to Covid-19—the U.S. was on track to exceed the emissions pathway outlined in the Clean Power Plan, a late-Obama era attempt to regulate emissions that was stifled by the Trump administration.

And then, the pandemic. New analysis by BloombergNEF finds that this year’s numbers are on track to be 9.2% lower than in 2019—the biggest drop on record. U.S. greenhouse gas emissions haven’t been so low since 1983, BNEF estimates, when the U.S. economy wasn’t quite 40% of its current size. Emissions are likely to rebound next year, but still be lower than any year since 1990.

This steep drop does something intriguing for U.S. climate commitments, both domestic and international. A look at the emissions picture by sector helps explain what.

Transport, now the biggest contributor to U.S. greenhouse gas emissions, has taken its biggest year-on-year hit ever. Emissions from transportation will probably be down more than twice as much as during the early days of the 2008-2009 financial crisis. Power emissions are likely to drop by a record proportion too, but industrial emissions won’t. Agricultural emissions will probably even increase, albeit very slightly.

Transport emissions are about a quarter of the U.S. total, but account for more than 40% of the total decline in emissions. Power and industry combined are only a slightly bigger contribution to the decline than transport on its own, while the commercial and residential sectors together account for less than 10% of the decline. The flip side of that very steep drop in transport and power sector emissions, BNEF expects, is that 2021 will see a record increase in year-on-year emissions. Industrial emissions, while also likely to increase, will probably not do so to the same degree.

While achieving the Clean Power Plan goals would remain a relatively trivial endeavor, it would be more difficult for the U.S. to meet the targets outlined in the Paris climate agreement, which President-elect Joe Biden has pledged to rejoin as soon as he takes office.

U.S. emissions from the transport, industrial, residential, commercial, and agriculture sectors aren’t on track to meet the Paris commitment of keeping global temperature rise below 2° Celsius. Combine them with the power sector, though, and this year at least, the country is just about on the right path. As we recover from the pandemic and emissions rebound, staying on that path will get trickier, but certainly not be impossible.

There is a final emissions factor worth mentioning here, and it’s quite different and scary: forest fires. This year, U.S. forest fires will emit enough greenhouse gases to offset the entire decline in power sector emissions.

One word of caution on forest fire emissions. As the BNEF analysts note, “a burnt forest will regrow, taking greenhouse gases back out of the atmosphere. There is no equivalent pathway for sequestration opened when fossil fuels are extracted and burned.” That said, if forest fires such as this year’s continue, they’ll be a significant new source of U.S. emissions even as emissions elsewhere drop.

Further efforts to reduce emissions—by means other than a pandemic—will require policies directed to specific sectors. Meeting Paris means making a choice: double down on the successes in reducing power sector emissions or set specific emissions goals everywhere else.Nathaniel Bullard is a BloombergNEF analyst who writes the Sparklines newsletter about the global transition to renewable energy.