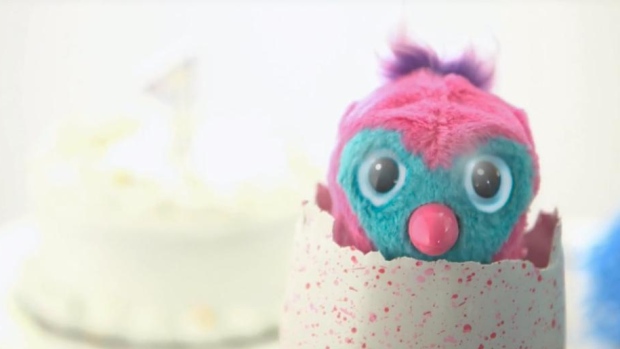 Some customers who bought Hatchimals, the year’s hottest holiday toy, were disappointed Christmas morning when their new gifts struggled to hatch.

Parents took to social media to express their frustrations.

“My daughter has been complaining about her Hatchimal not hatching for the last 30 minutes,” one parent posted on Twitter Sunday.

Spin Master (TOY.TO), the Toronto-based company that makes the toy, issued a statement on Facebook Christmas Day addressing the complaints.

“We are sorry to hear that some of you are having challenges with your Hatchimals,” the post read. “The first step to note is that the plastic 'locks' located underneath the egg need to be turned 90 degrees and pulled out from underneath to activate the hatching process.”

In a statement released Wednesday morning, the company said it will increase the number of consumer care representatives to help deal with the issue.

“We are 100% committed to bringing the magic of Hatchimals to all of our consumers,” the statement read. “To ensure all queries receive a timely response, we have increased the number of Consumer Care representatives, extended our hours, and increased the capacity for callers in the queue to help prevent calls dropped due to the holiday volume.”

One portfolio manager told BNN that investors should be cautious when it comes to buying into a stock based on a blockbuster product.

“The smart money thought ahead,” Lyle Stein, senior portfolio manager at Vestcap Investment Management, said in an interview. “One of the questions I think you always have to ask yourself as an investor is … Who am I buying that [security] from?”

“You buy on rumour, you sell on news. And now the news is coming out and it’s disappointing,” he added.

Hatchimals, with a retail price starting at $59.99, had seen an unexpected amount of demand since they landed on store shelves Oct. 7. In a global launch, the toy was released in 50 countries including Canada, U.S., U.K., Ireland, Spain, France, Japan, New Zealand, and Australia and the Philippines.

Hi fans! Thank you for reaching out. We have received your messages & are working hard to respond to all inquiries. Appreciate your patience

I am stressing out way too much over this Hatchimal not hatching....

Defective. Makes noise but 2 hours of playing with it and it is not hatching. @SpinMaster #hatchimal

My daughters been complaining about her Hatchimal not hatching for the past 30 minutes.